Master
At the time of becoming Master Peter, had worked in the City for almost exactly 30 years specialising in Non-Marine Liability insurance. A Liveryman within The Worshipful Company of Poulters. Members of various other City organisations including the Royal Society of St George.
Upper Warden Roger Earthrowl
Lower Warden Mark Gubbins

IPM John Bristow said “I am reminded of John Donne, Rector of St Paul’s in the 1600’s who said “No man is an island, entire in itself” in the same way, I would say, no Master is a Ward C because he depends so much on those around him and in particular the Hon Sec.”

Red Cross Fayre
A sub-committee was created to consider the way forward for the Club’s involvement, given the retirement of Ronnie Garton.
It was felt that the very successful “Wheel of fortune” had run its path.

Minor Rule change
Rule used to say that the AGM had to be in the third week of February – this was changed, at the suggestion of Mark Gubbins to read “February”

Finances
Hon Treasurer reported that many of those with Life Membership had reverted back to Annual.

N.B. It was proposed and agreed that the Club’s overall  Charity Donation amount be increased to 1,000.00p

This year’s Annual Dinner was attended by 75 Members and their guests with the Guest Speaker being Mr Tom McGrath OBE, Deputy Chairman, Marsh Ireland, the Chairman of the Irish Tourist Board and an ambassador for The Prices Trust. – apparently in “an earlier life”, he was also a comedian.
The Master specifically made the point that the ladies present were very welcome.

It was provided by Avenance
Many compliments were made during and after the Dinner.

A really fascinating and enjoyable Morning for 32 Members and their guests involving both a guided tour of the Grand Temple, Library and time to look round the museum. 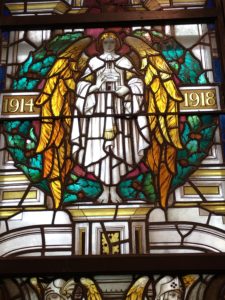 Over the morning we learnt about the History of Masonry, viewed some amazing pieces of Masonic related Art, China…..
Probably for most it was the visit to the Grand Hall that was the most memorable, a stunning room and two very large bronze doors leading into it 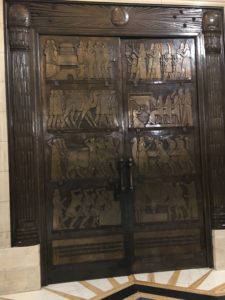 These are perfectly balanced and can be moved with simple push. (Or possibly the cleaning system, dating from the 1930’s where there is an internal vacuum system running through out the building – cleaners just come into a room and plug their “vacum cleaner” into a socket in the wall and the dust is sucked out into the central system – very American)
This building was built between 1927 – 1933 funded from donations from all over the world

After the tour the group went off to a local pub (Hercules Pillars) for a very convivial Buffet lunch with a glass or 2 of wine.

Member’s Only Evening – Thursday 1st May

44 Members enjoyed a convivial evening on the Upper Floor of The Lamb in Leadenhall Market. It seems that various people had commented that they did not get enough time to meet with other members at more formal functions – thus this specific Member’s Only event.

120 Members and guests enjoyed this event, which this year was held in The Old Library, in the Presence of Mr Sheriff Martin Clarke. The Lord Mayor (Alderman Gavyn Arthur) had planned to attend but had to withdraw to attend a lunch involving King Abdullah II of Jordan at Royal Hospital Chelsea.

The toast to the health of the Lime Street Ward Club was given by The Rt Hon. Lord Strathclyde, Leader of the Conservative Party in the House of Lords. Before entering politics he had been an insurance broker. He arrived in a wheelchair having recently broken a metatarsal (in company with David Beckham) and only as guests were being seated – the Master was on “tenterhooks”

The Master and the Hon Sec attended this Annual Event, enjoyed by both of them.

Matters of interest
Debate about using Lloyd’s for the AGM and Dinner in 2004. Decided to continue with it for 2004 but other possibilities might be considered in 2005 including the City Livery Club.
A year in which the City Boundaries were reviewed for the first time in possibly centuries. MAP TO BE ADDED
– a tiny strip of Billingsgate Ward that ran between Lime Street and Cornhill Wards (Down Bishopsgate and Gracechurch Street) was removed.
See the notes below re “Walking the Bounds”

A year when rising to Mayoralty was no longer based on Seniority but on Agreement by the Aldermen. This created a degree of uncertainty re when our Alderman might proceed to become Sheriff and Lord Mayor. (Turned out to be much sooner, rather than later).

Visit to the River Police at Wapping  – Tuesday 8th July

25+ Members and Guests attended what must have been a very informative and entertaining presentation on the role of the River Police – who form part of the Metropolitan Police even though the City of London is responsible for The Pool of London. The talk, at Marine support Unit HQ was given by Bob Jeffries who at the time was in the process of training for his  City “Blue Badge” (Guide). There is no clue as to which “hostelry” the group moved onto although it seems likely that it was one of – Captain Kidd, Town of Ramsgate or The Prospect of Whitby, all within easy walking distance.

The first redrawing of the Ward boundaries for several centuries took place in 2003. Thus, a walk following the revised boundaries of Lime Street Ward, which increased slightly in size as a result of the Boundary changes (we are still a small ward in terms of physical size). It was also the first time that the Ward Boundaries did not go through the middle of buildings (often!). We gained a section at the top of St Mary Axe from Bishopsgate Ward, but they retained the parallel section fronting onto Bishopsgate and the Northern side of St Helen’s Place (including Leathersellers’ Hall at this time).
N.B. Further changes were made in 2013 where we lost the southern part of Leadenhall Market.  The Guide was Bob Jeffries (See River Police above) who had just qualified as a Blue Badge Guide. The walk finished with a Buffet Supper at the Grapes in Lime Street for approx 30 people.

An annual event involving many Officers and representatives of Ward Clubs. Very busy and fun. A great opportunity for Ward Clubs to promote themselves 9as an entity) to the Lord Mayor and Sheriffs.

A small group (17) of very hardy souls were up at the crack of dawn for a visit to Billingsgate Fish Market
– a visit kindly arranged by Past Master David Butcher. 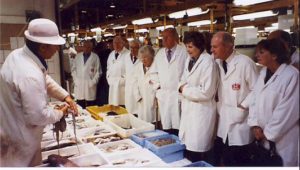 Certain to have been quite chilly in the Market itself, 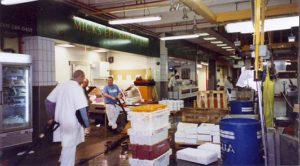 A small group (17) of very hardy souls were up at the crack of dawn for a visit to Billingsgate Fish Market – a visit kindly arranged by Past Master David Butcher. Certain to have been quite chilly in the Market itself, making the hot Kedgeree afterwards even more enjoyable.

Rioja and Tapas – Wine and Cheeses from the Iberian Peninsula and Islands. With Mark Gubbins’ choice of wines, enthusiasm and knowledge  coupled with Cheeses from the International Cheese Centre at Liverpool Street, a great evening was had by all.

As agreed at the AGM a decision to amend the rules regarding the period in which the AGM was to be held  – on any date in February not just in the 3rd week of February was supported.

The Lime Street stand in recent years had only really been successful because of the efforts of Ronnie Garton and his family.

After their retirement, and with a great deal of time and effort the Ward Club launched a new fund raising venture, a Board Game involving answering various clues and trying to ascertain where a “crock of gold was hidden.
With a great deal of hard work from Messrs, John Tuff, Roger Earthrowl, Robert Woodthorpe Brown, Stanley Lui and Peter Cave
£275 was raised, with a further £240 raised through the sale of Raffle Tickets. It was agreed that a simpler variation of the Treasure Hunt would be needed in 2 years time.
The event overall raised approx £77,000.

60 friends and members attended this year’s Service, which was presided over by our Hon Chaplin Rev Nigel Beynon. The Choir from St Mary The Virgin – Shoeburyness, led by Michael Crabb were, as usual in excellent voice and really added to the proceedings. Organist James West.

In addition many people very kindly brought gifts, brightly wrapped for the “under 5s” which were collected by the Good Shepherd Mission, Bethnal Green, who were extremely appreciative.

Master and 18 Member’s in attendance
Items of Interest
Increase in subscriptions due to many of the Life members reverting back to an annual subscriptions.
Advice that Dep William Archibald had lost most of his sight and that he was standing down as CC. It was proposed that he be Appointed an Hon Vice President – this was fully supported at the meeting.
Number of CC’s for Lime Street Ward to be reduced from 4 to 3 at next election – (in 2013 reverted to 4)
Quite a long debate re St Helens which is now in our Ward and the use of St Peter upon Cornhill for our Carol Service.
Overall felt that it was at the Master’s discretion re the venue, but that this whole topic might be raised at a later AGM.