Our aims and objectives

To be “A welcoming, Social Club with the City, Lloyd’s and Leadenhall Market at its heart”.

Our Ward Club was set up just after the end of the second World-War (1946) with the express aim of encouraging people who worked in the City, lived in the City or who had connections in the City to;

The Objects of the Club as per our Rules (Rule 2) were originally  “to arrange from time to time meetings to promote friendly intercourse, the discussion of Ward, Parochial and City matters, and topics of local and general interest, exclusive of those of a religious or political nature.”

More recently (2015) there were updated and slightly augmented to read

The Objects of the Club are to arrange meetings and events from time to time to promote friendly discussion and interaction among Members and their guests including  discussion of Ward, Parochial and City matters, and topics of local and general interest, exclusive of those of a religious or political nature.

To actively encourage, interest and involvement in the City Civic, especially in both our Wards (Lime Street and Cornhill) and to support positively our Aldermen and Common Councilmen.

To encourage and support “good causes” from time to time.

To some people, possibly, the concept of a Ward Club sounds an anachronism – ironically as life seems to be creating a more screen based 24/7 environment
– the reverse may be true.

Our Ward Club and many of the other Ward Clubs offer a great opportunity to meet people from varied backgrounds all with an interest in the City in relaxed social environments.

Not all Wards have had “Clubs”, Cornhill was one of those. In about 1975-76 the Corporation of the City of London experimented with “grouped wards” as a way of allowing smaller wards to link up to appoint members jointly to some of the Corporation committees. Cornhill was grouped with Lime Street and in this case the relationships worked well. (Sir) David Howard (Cornhill), Harry Duckworth, the Lime Street Deputy, and Bill Kelloe, Secretary of Lime Street Ward Club at the time proposed that Cornhill people be invited to join the Lime Street Ward Club, including inviting Cornhill Common Councilmen onto its committee.
The Corporations experiment failed fairly quickly but the links at Ward Club level  remain as strong as ever. 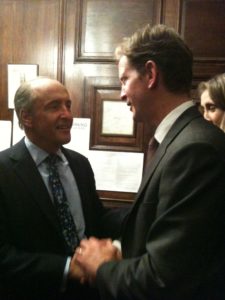 Robert Howard was elected as Vice President at the 2016 AGM.