City Events
An evolving area of the Website.  More events will be added from time to time

One of the very special Annual occasions in the City. Open only to Liverymen. The transmission of power from the incumbent Lord Mayor to the Lord Mayor Elect.  IF you get a chance to go. GO.

Unless you are fortunate to get seats close to the “action” – you will not really have much idea what is going on, as basically the whole event is held in total silence.

The key players in the City Civic march into the Great Hall of Guildhall
Once seated the Lord Mayor elect reads the declaration according to Statute 31 and 32 Vict., cap (Promissory Oaths Act, 1868) and signs it.

The Sceptre
The Seal of Office
The Purse

The Sword
The Mace
The Collar of SS and Badge

The new LM is then presented with an Indenture for the City Plate, which the incoming Lord Mayor signs and then the appointment of the Deputy City Gauger

The LM is then congratulated by all the major City personal including the Aldermen.

The longest unrehearsed Parade in the world – three miles long, 6,500 people, 200 vehicles and 70 floats and music all the way.

The parade starts to form up in various streets near Guildhall, in particular, London Wall, Aldersgate Street, Nobel Street (Horse Drawn Vehicles) and Moorgate.  The front of the parade passes, Guildhall and stops at the starting line in Princes Street ready for the signal at 11.00 a.m.  It then  proceeds past Mansion House, along Cheapside to St Paul’s and then on up Fleet Street to the Royal Courts of Justice where it stops for lunch. The Lord Mayor, who joins the parade towards the end, swears his allegiance to the Queen.   After everyone has had some lunch, at 1.00 p.m. it starts back via Temple, along the Embankment up to Blackfriars and then towards the finish line passed Mansion House.

After the show, there is still plenty to do in and around the City……lordmayorshow.org

Attention to detail – When the Ward Club took part in the Lord Mayors Show Nov 2005 (Sir John Stuttard our Alderman and Club President became Lord Mayor) we were fortunate to be allowed to use a 1920’s  Double Decker Bus (Michelin). The theme we chose was “Education through the ages”.  On the Upper Deck we had a class from St Trinians!, with a Blackboard tied to the front of the bus. Before we moved off, one of Dominic’s Team stood staring for quite a long time at the Blackboard – then nodded and moved off. On the return leg we got though an overhang with about 5cm to spare!! (Peter Cave was ready with screwdriver and knife – phew!)

Organised by the Worshipful Company of Carmen, a Livery Company of the City of London, this traditional annual event sees a procession of weird and wonderful vintage vehicles – from lorries and buses to trucks and tractors – line up along Gresham Street ready to go into the historic Guildhall Yard to be ‘marked’ with a red hot iron by the Company’s Master and the Lord Mayor. This ancient tradition is carried out to demonstrate that the Carmen of today are still the carriers of the nation’s goods, and that the City retains the right of marking. 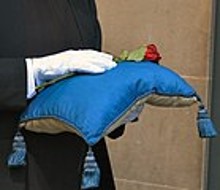 Watch a small procession leave All Hallows by the Tower and go to “Seething Gardens” to pick 1 rose – this will then be escorted through the City to the Mansion House to be presented to the Lord Mayor. This tradition goes back to 1381 when the wife of Sir Robert Knollyes  knocked down a building and replaced it with a Rose Garden and a bridge – she did not have planning consent!

The Court decided that a rent of 1 rose should be payable. Although the bridge no longer exists, the tradition continues.

The oldest consecutively run sculling race in the world. Held virtually every year since the first race 1715+. Thomas Doggett offered a prize for the fastest apprentice oarsman, rowing between London Bridge to Chelsea Bridge. The winner receiving his “coat and badge”.

It is still competed for every year by Freemen of the Company of Watermen and Lightermen.
+ It was not held during the 2nd World War but a series of races were held in 1945 to maintain the sequence.

If you are a Liveryman and you can get a ticket – a fantastic event. St Paul’s Cathedral Full, Organ and Choristers in full voice – Lord Mayor, Masters….in full procession. A special occasion. If cannot attend be outside between 10.30 and 11.15 – lots of action.

Th City of London Corporation attend the Law Courts late October/early Novembert o pay rent to the Queen for two pieces of land  – specific location of which not exactly known . This has taken place since 1211

Tweezers Alley, near the Strand – 6 HUGE horse shoes and 61 nails!!!

This is the oldest legal ceremony apart from the Coronation