In 1993, the Local Boundary Commission for England and Wales undertook a review of the boundaries in Greater London. This was part of their continuous rolling programme. They report directly to Parliament, and have sole authority to recommend constituency, borough and ward boundaries in the whole of England and Wales, with one notable exception. The City of London.
The City has the unique authority to determine its own internal ward boundaries, essentially based on the Charter given to the City by of William the Conqueror.  Only Parliament or the Queen, by a further Charter, can over-rule this.

The Commission began with the view that the City was the wrong shape and size, in its re-drawing of the boundaries of the Cities of London and Westminster Parliamentary Constituency. It proposed to the City that we might straighten out the mediaeval boundaries of the City, and take in or lose bits around the edges. There was a lot of straightening in places like Charterhouse Street and Smithfield, in particular, but in many other places too. Overall the City gained about 10% in size,  the electoral gain was probably higher.

In these changes the City also acquired part of the Goswell Road, the first “road” in a City which traditionally never had any “roads”.

At the same time the City conducted a simultaneous internal review of the wards. A tidying up process.

Roll forward a couple of years to 1996/97. The City of London Corporation was facing abolition by the ascendent Labour Party but thanks to some major persuasive lobbying the Labour Party Leadership agreed that reform was better than abolition.

This generated various Acts of Parliament in around 1999 and 2000. One of the Acts, required a re-balancing of Ward boundaries and Common Council members. The House of Lords  insisted on preserving the Corporations proposal for the business vote but saying that a company’s voting entitlement should be based on the number of its staff working in the City, not the rates that it pays.

The Corporation is required to report to the House of Lords every five years on how this is working, and so far the result of this has been fine.

The purpose of this was to meet the requirements of the Act, to adjust the wards and the number of Councilmen per ward to match the present and likely electorate – both residential and business. – to seek approximate parity. This meant significant changes in the boundaries, and the numbers.

The 1993/94 boundary exercise was conducted by the Commission. The 2003/04 exercise was a purely internal City affair

2013 Boundary Review
Although there were major changes in some Wards in 2013, including Lime Street. Cornhill was left unchanged except for an increase in the number of CC’s from two to three.

[1] With much thanks to Sir David Howard

“It is worthy a remark that, though the Ward includes parts of several parishes, there is not even a whole street in it” John Noorthhouck (1773).

Lime Street Ward is a very small ward. It probably takes its name from the production of lime in the vicinity during medieval times. (although it is said that no evidence of lime kilns have been found in the area. Another variation is that Lime Trees used to be planted outside Leaden Hall.

Lime Street
Was named after lime burners in medieval days,
When its use proved popular in building ways,
For the use of limestone in replacing wood,
Became much safer and extremely good.

This City Ward has since those days grown,
Into an insurance center very well known,
One building particularly dominates the street,
Lloyds of London where Syndicates meet,
The world’s Premier insurance brokers by far,
Cover risks from ships of the ocean to a motor car.

In this Ward established and open to all,
Is the well known market called Leadenhall,
Once a mansion owned by Dick Whittington,
Who presented it to the City Corporation. 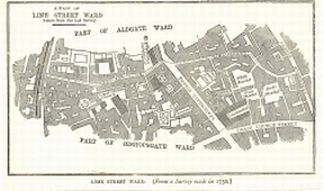 Our Southern and Eastern Boundaries are more complicated. Our Boundary includes Lime Street but then cuts back up through part of Leadenhall Market, into Gracechurch Street and north up to Camomile St.

Following a Boundary Review for the 2013 Common Council Elections our Boundary was changed, we lost the southern part of Leadenhall Market to Langbourn Ward. A senior City figure who is closely connected to Langbourn and Langbourn Ward Club did observe “We still have not got The Lamb into our Ward”. 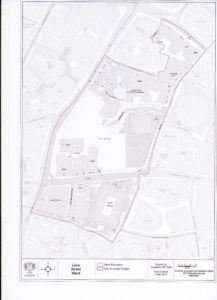 N.B. A Virtual Ward Walk was organised in 2020 – see the PowerPoint presentation here
To enlarge Click on X bottom right hand corner.  To move the slides forward, backwards, Up and Down arrow 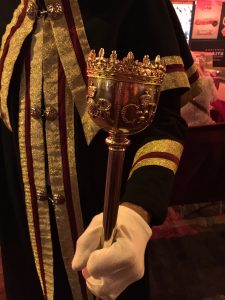 Lime Street Ward – over the years. some  items of interest.
– taken mainly from City of London, Ward News

One of the major issues facing the Lime Street Ward in the 2015 to 2020 period is planning, especially the growth of high rise buildings in the “Eastern Quadrant”.

“Many of you will think that the occupation of the Scalpel and the imminent completion of 100 Bishopsgate (The Pinnacle) marks the end of the massive redevelopment phase within what is now known as the City Cluster – most of it in or neighbouring the Lime Street Ward. But to quote Sir Winston Churchill after the battle of El Alamein “This is not the end, it is not the beginning of the end it is perhaps the end of the beginning” as evidenced by the Map below. where development will show little sign of slowing down until 2023 at the earliest. The pipeline City cluster developments are likely to bring a further 40,000 workers into the Area”

A new Lord Mayor is elected – Lime Street Alderman and Ward Club President Charles Bowman. an exciting time for everyone

After the 4 yearly Common Council elections our CC’s introduced themselves.
Returning Elizabeth Rogula (Deputy), Henry Colturst, Dominic Christian and newly elected Tom Clementi – Congratulations to all of them.
Ward Club Past Master Peter Cave, stood in this election and lost by 11 votes – fairly fed up:).

An experimental closure of Lime Street (8.00am to 6.00pm) was introduced in order to support the  increasing pedestrian flows and greater visitor numbers in this part of the City.  (It basically became permanent) 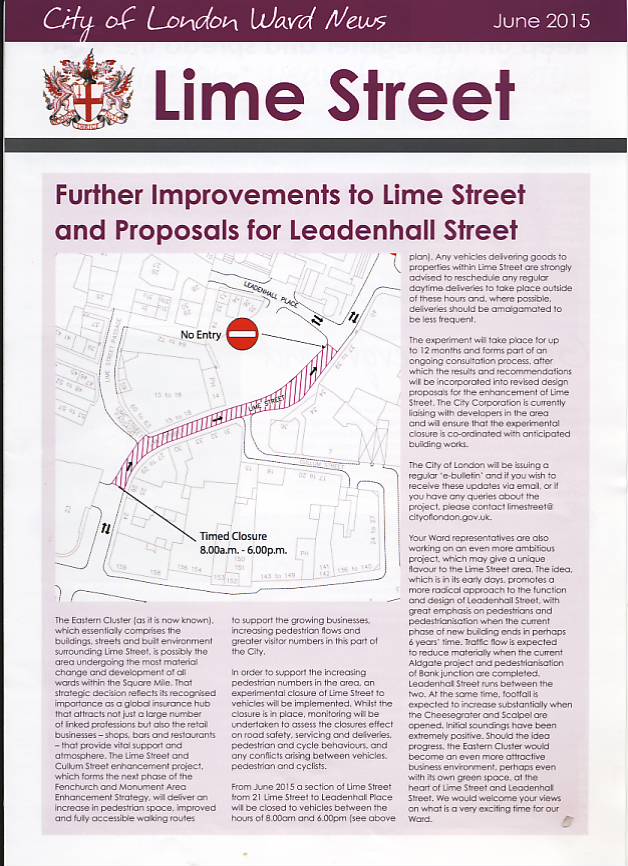 The City of London Corporation owns Leadenhall Market and announced that it was proposing a strategy  to ensure that Leadenhall Market and its environs are managed efficiently to produce an improved tenant mix, which will result in a more attractive offer and a higher footfall and ensuring that it serves the needs of local residents, businesses and workers.

Serious concerns were expressed regarding the impact of the major ongoing development works on workers and businesses. 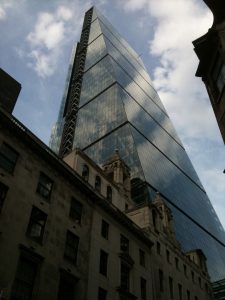 Cheesegrater on track for completion 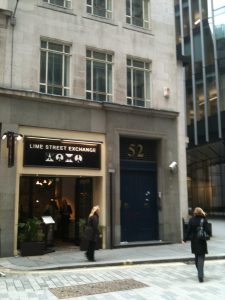 Demolition of 52-54 Lime Street in hand for the development of the Scalpel.

Longer term plans for 2 Pedestrian Crossings crossing Leadenhall Street on both sides of the tuning down St Mary Axe, being considered.

Past Master Tim Willens also stood in this election but was defeated.

December 2013
The boundary Commission for England published its proposals regarding new constituency boundaries. they had wanted to break the link between The City of London and the City of Westminster, this received substantial opposition from Residents and Businesses and was shelved.

August 2012
The 2nd year of the Great St Helen’s Sculpture space was initiated, involving 8 artworks over the area. Installed in June and having a value of around Pnds 1.8m 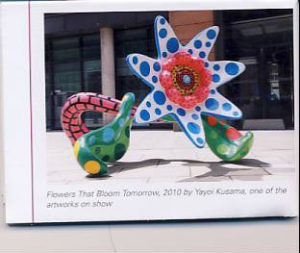 A Summer of celebration is coming.
The Olympic Games, comes to London and the Womens’, and Mens’ it is hoped will run through part of Leadenhall market, with the Paralympics going past the market down Gracechuch Street to Cornhill. In addition part of the Olympic Torch Relay was also planned to come through the City.

In addition on 3rd June the Queens Diamond Jubilee River Pageant was due to take place on the River Thames finishing at Tower Bridge. It did! It rained incessantly but still an amazing experience to watch. Especially the Gloriana with the queen and Price Phillip standing resolutely in the foul weather so they could see and be seen by the thousands lining the river. 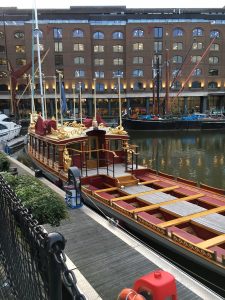 Gloriana in St Katherine’s dock, on a quieter and better day.

Work is well underway on the construction of Crossrail – the new high frequency railway connecting the City, Canary Wharf, the West End and Heathrow Airport to commuter areas east and west of the capital

The next 12 months will see plenty of activity around the Farringdon and Liverpool Street areas with knock-on effects with regard to transport, access and noise. The works will require traffic diversions – affecting bus routes, pedestrian access, cycle hire points and taxi pick up points.

When it opens in 2018, (this entry was made in Dec 2020 – still no sign of  it opening), Crossrail will deliver new train services and reduced travel times around London and the South East.

April 2011
Retirement of Deputy Christine Cohen.
Extracts of a Report to the Court of Common Council by Alderman Sir John Stuttard.

“Christine has served as a very successful CC for Lime Street Ward for 25 years. she served on 19 Corporation Committees, Boards and Associated Organisations Chairing 8 of these exceptionally competently. Her contribution to green things in particular has been quite outstanding. these have included open spaces such as Hampstead Heath and Epping Forest and Gardens and Walkways within the Square Mile”

These figures are prior to the change in voting structure that allowed for Corporate entities to have votes.

Cornhill Ward is named after one of the three ancient hills of the City of London – the other two being Tower Hill and Ludgate Hill.
After boundary changes the Ward is almost shaped like a pointed boot. The northern boundary being Wormwood Street. The western boundary runs down Old Broad Street into Threadneedle Street where it meets Cornhill which creates its southern side. A short detour into Birchin Lane cutting round the back of both St Peter’s and St Michael’s brings one into Bishopsgate (the Eastern Boundary).

The western boundary runs down Old Broad Street into Threadneedle Street where it meets Cornhill which creates its southern side.

Cornhill
The City’s Cornmarket was here located,
Where the price of corn-wheat was hotly debated,
And in medieval times was a very busy street,
There stood the Tun a water conduit,
Known as the standard or a water supply,
Direct from the Thames into houses nearby,
For this part of the city was no defaulter,
Towards the needs of life, like bread and water.

North of this Ward and just within range is Thomas Gresham’s Royal Exchange,
From vein of Bell tower a grasshopper looks down,
His emblem surveying Old London Town.
William Wylie-Harris

Cornhill contains two of the City churches designed by Sir Christopher Wren: St. Michael, Cornhill, and at the top end St Peter upon Cornhill, (our Ward Church) which is reputed to occupy the oldest Christianised site in London. At its other end it meets Threadneedle Street, and Lombard Street at Bank junction. 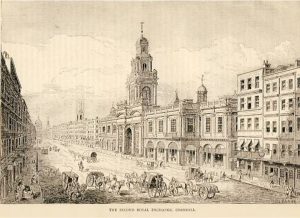 The 1st and 2nd (See above) Royal Exchange fronted onto Cornhill, not facing out towards Mansion House as the latter ones have. 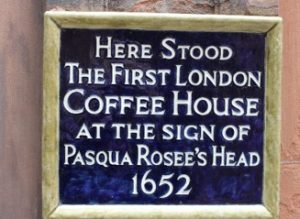 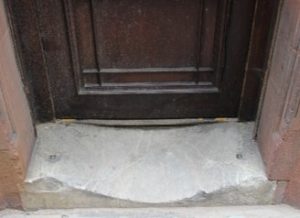 In 1652, Pasqua Rosée, possibly a native of Ragusa, Italy, opened London’s first coffeehouse, in St. Michael’s Alley off Cornhill now the site of the Jamaica Tavern.

N.B. A Virtual Ward Walk was organised in 2020 – see the PowerPoint presentation here
To enlarge Click on X bottom right hand corner.  To move the slides forward, backwards, Up and Down arrow

Ward Mote
Ian Seaton CC a member of the Corporation’s Finance Committee reported on the strains on budgets, including that for the City of London Police. He also reported on plans  to consolidate the City’s wholesale markets. Smithfield, New Spitalfields and billingsgate, all into East London.

The Irish Society
Peter Dunphy was recently elected as “Deputy Governor” of the Irish Society (The Senior role for Councillors). The Honourable Irish Society was formed in 1613 to encourage the “plantation’ of North West Ulster with loyal, industrious and most importantly Protestant Londoners. Today it is a modern, strictly cross community grant giving charity for the economic and social benefit of all.

Inserted for info, as happens to be on the file