Master John Bristow
Worked in Lloyd’s for 35 years, retiring as Aviation Underwriter for Bankside Agency in 1991.
Ran off several of Gooda Walker Syndicates and joined Equitas (the Lloyd’s run off vehicle) in its very early days as a member of the Major Catastrophe team.
A Chartered Insurer, Liverman of the Worshipful Company of Insurers and of the World Traders Company.
Keen gardener and President of his local bowling club.

Immediate Past Master Mr John Tuff and the Master announced that they thought that the Hon. Secretary should have a Badge of Office, which they had very generously donated to the Club. Mrs Ann Benson was proud to be the first recipient.
One of the major items on the Agenda was the discontinuing of the Life Members Scheme for any new members. Originally Life Membership was set at £50, then increased to £100 and finally £200. All life members of over 10 years standing (£50) were asked to consider reverting back to paying an Annual membership fee – the majority did.
It was suggested that members might like to start to receive advices of events… by e-mail.

N.B. It was proposed and agreed that the Club’s overall Charity Donation amount be increased to £1,000

80 Members and their Guests enjoyed an excellent evening, with the guest speaker being – Mr James McConville. Professor and Director of International Transport Management at Guildhall University.
The Menu comprised;

This year, with the Lord Mayor being a Member of Bishopsgate Ward Club and a Past President, the Ward Club were able to hold their Annual Civic event at Mansion House. Regrettably the Master and his mistress were unable to attend. The Hon. Sec did attend and “really enjoyed the meal, the speeches and the singing”, “A most impressive occasion”

A large turnout for this fascinating visit which involved almost 60 members and their guests. They enjoyed a visit to this historic building followed by supper at the Old Tea Warehouse in Creechurch Lane. (They did not have “tea”)
There was a guided tour given by the Shamash (Curator) Maurice Bitton. 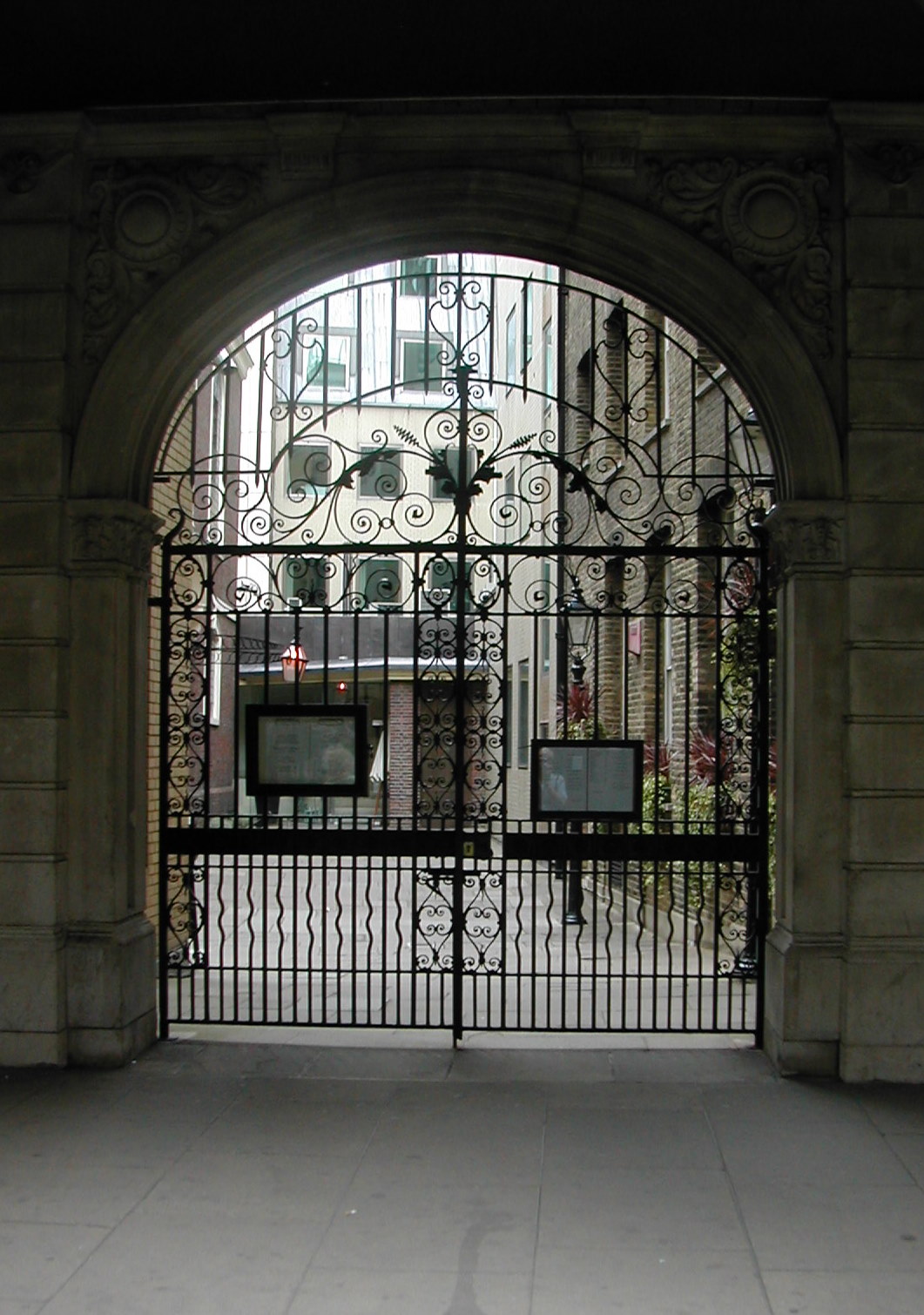 Maurice explained that this building (1701) superseded a small house built after the Jews’ re-admission to England under the Rule of Oliver Cromwell in 1657. They were shown a fine collection of Cromwellian and Queen Anne furniture, whilst admiring a very “Wrenlike” building. Apparently it was designed intentionally so it would not “stand out”in the area.
Cost including supper. £12.50 per person. 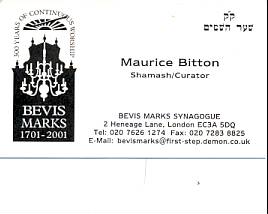 Hymn Praise the Lord , the Almighty, the King of Creation

Hymn Lift up your hearts, we lift them Lord to thee

William is to become our Ward Club Hon Chaplain in a few year’s time. 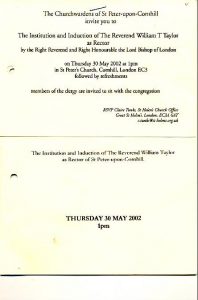 The Old Library, Guildhall in the presence of the Lord Mayor (Michael Oliver), the Lady Mayoress and Alderman Sir Roger Cork. The guest speaker was The Very Rev. Victor Stock, Dean of Guildford, who had until recently been Rector at St Mary le Bow, Cheapside, (for 15 years) including 2 terms as the Lord Mayor’s Chaplain and 5 years of weekly slots on Greater London Radio – the Tuesday Dialogues. He had recently published his diaries “Taking Stock, Confessions of a City Priest.
120 Members and guests attended the Civic Lunch which was provided for the first time by “Turtle Soup”, who had been suggested by Mr Stanley Liu. The previous 4 years being with Payne and Gunter.

Items of interest included;
Positive reports on the Caterers at the Civic Lunch (“Turtle Soup: a subsidiary of Chester Boyd) recommended by Member Mr Stanley Liu

Announcement that an EGM will be held before the Wine Tasting, to pass the Rule Change re Life Membership.

41 Members and guests enjoyed a fascinating couple of hours at this very popular venue. They were greeted by Mr Patrick Dickenson (Richmond Herald) who gave them a guided tour of the building, introduced them to some of the core principles of Heraldry, and the role of the College of Arms in the 21st C.
Ticket. £21.50 per person.

An extremely popular event – 49 Members and Guests enjoyed a 1 hour and a quarter private tour of both Houses of Parliament, followed by tea in the Jubilee Restaurant. As they were guided around they learnt of the 1,200 Rooms, 100 Staircases and over 2 miles of corridors. The House of Commons is seen as the seat of Parliamentary Power and is apparently recognised as the superior House by the House of Lords.

Ticket price. £5 per person – a bargain.

An even more popular event – 55 intrepid “sailors” boarded the “My Fair Lady” for a Supper Cruise on the Regents Canal – supper included;
Sliced Turkey, Fillet of Trout, Vegetarian Terrine, salads and deserts.

The cruise went on the Northern part of the Regents Canal, past London Zoo and its Aviary, Regents Park and though a short tunnel toward Little Venice – returning back to the starting point of Walker’s Quay.

No doubt, a goodly number of Officers and Members of the Ward club attended this popular event in the presence of the Lord Mayor, Lady Mayoress and Sheriffs.

Bamboozled by Hand Magic, Intrigued by Illusion, another great evening for the 30 who attended this very popular event. A long time afterwards people were still asking “how was that done”! A tried and tested format. Sherry on arrival, whilst watching “hand magic”. Then a short break with sandwiches and a glass of wine, coffee. The evening finishes off with a stage show possibly around the the theme of some of the Magic Circle’s more famous or infamous members.

The club were invited to apply for tickets in the stand near St Paul’s followed by lunch at Singapura (Singapore) an Asian Restaurant nearby. £21 per person for tickets including the programme. 9 Members went for lunch . £22 per person.

Lime St Ward Club, ponders the future of the City

Very relevant when it was written at the end of 2002 and just as relevant when extracts were put into the Website in November 2020.

“Hon Sec. Ann Benson and Asst Hon Sec. Rowland Hughes are incredibly passionate about their role and indeed the significance that the Lime St Ward Club has in the City.
They see Ward Clubs as a vital cog in the City “Machine” and a stepping – stone to Livery Companies. (Lord Mayor Fiona Woolf said some year’s later “Ward Clubs are a force for good in the City”).
They see The Ward Club as being an important channel of communication between those working in the City and the Corporation and they also have Contacts with many of the Livery Companies that date back to the Middle Ages

Although they are essentially a Social Club, the community that has been created is an important part of the City of London’s life, although in recent years the social side of the City has become somewhat subdued and that it was a struggle to remain as important and significant today as in the past – a constant challenge.

Life has become more individualistically orientated and the sense of Community is struggling to survive in the City, therefore our role at the moment is to look to keep the Club vital, as we cannot let the purpose of Ward Clubs and  the tradition they represent die.

Ward Clubs do not have the financial clout of Livery Companies yet Lime Street Ward Club still manages to donate a significant sum of money to charity each year, particularly the Lord Mayor’s Appeal and the Sheriff and Recorders Fund.”

St Olave’s Church Hall was the venue for this very popular Wine Tasting given by Past Master Mark Gubbins, and attended by 57 Members and Guests, Certain to have been good, varied and included a “sticky”?

Special General Meeting – held immediately before the Wine Tasting
This was to formally get agreement to the proposal that the Life Membership will not be offered in the future
and
To clarify the position if more than one person be nominated for Lower Warden and joined the Committee at a similar time – the decision would be based on date of joining. and then Event attendance.

Both were carried unanimously

The Lime Street and Cornhill Banner

The new Rector of St Peter’s enquired as to whether we had permission from the Archdeacon for this banner to be permanently situated in the Church, Past Master John Tuff conformed that this was the case.

Our traditional Carol Service was well attended, with all those there enjoying the Service and the friendly atmosphere that followed – with a glass of Wine, Mince Pies…..At the suggestion of the Revd. Nigel Beynon’s the Club agreed to donate gifts to the The Good Shepherd Mission in Bethnal Green. (This was the 1st time that we gave gifts to The Good Mission – prior to this year they had been given to “Barts” Children’s Ward)
A goodly number of presents for young children were donated, which were very warmly welcomed by the Mission. This tradition continued until and including 2012. When the Mission changed Direction (helping Adults). From 2013 we gave presents via St Helen’s to very poor areas close to City.

The Choir of St Mary the Virgin, North Shoebury (their 2nd visit to this service) started the service with;
“This is the truth sent from above”

The end of a very good year.

A very good friend to many in the Ward Club Miss Ann Gale (Anni) , The Principal Assistant – Diary to the Rt Hon. The Lord Mayor, was honoured to receive the MBE in the Queen’s New Year’s Honours List. Club Members were thrilled and said so.

The letter below, says it all. 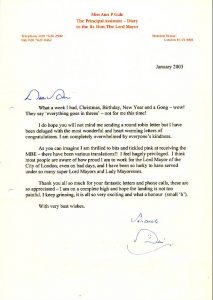 Items of interest.
General discussions about Ward Club involvement in the Red Cross Fair and new ideas being needed.
Lord Levene as newly appointed Chairman of Lloyd’s had been invited to become an Honorary Member of the Ward Club and had accepted.
Miss Anni Gale (Principle Assistant – Diary, to the Rt. Hon. The Lord Mayor) had received an MBE in the New Year’s Honours List
– congratulations had been sent to her from the Ward Club.
Further discussions about Lloyd’s as the venue for the AGM and Dinner. Feeling seemed to be that as there was no other suitable venue within the Ward we would stick with it – unless it priced itself out the Club’s range.