Master Bryan Wakeham
When becoming Master he had already had a career spanning over 56 years at Lloyd’s including MD and Chairmanships of various Lloyd’s Brokers. Chairman of the Three Rooms Club, a Poulter, an active member of the M.C.C. and the Royal Society of St George.

Bryan very kindly donated a Gavel to the Club, which has been used ever since to keep Committee Meetings and AGM’s under control and in addition a Goblet, “The Master’s Cup” that is on display at every Annual Dinner and Civic Lunch. He also in conjunction with Roland Hughes presented the Lower and Upper Warden’s Badges to the Club.


It was agreed to present Rev Coombs with a Silver paper knife. Obtained by Hon. Sec

The Master requested that the Chairman of Lloyd’s be invited to become an Honorary Member. This was agreed and Mr Max Taylor accepted. 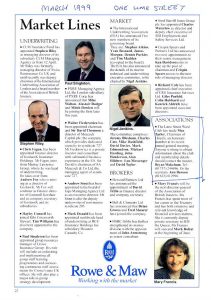 The Master kindly donated to the Club a wooden gavel and striking board and proceeded to make positive use of it to close the Meeting.

Reported that a sub committee had been set up to prepare for the Club involvement in the Lord Mayor’s Show, namely,
The President, Master, Hon. Sec, Asst Hon Sec, Past Master Julie Gubbins, Past Master David Bridges.

Dinner
80 Members and guests enjoyed Dinner in The Captain’s Room at Lloyd’s (£41.50 per person including wine), preceded by drinks whilst viewing the the “Nelson Collection”. The Guest speaker was Donald Coombe MBE. JP, a Member of Lloyd’s and Chairman of his own broking house, a Freeman of the City of London.
There was a specific request from the Master that in the invitational letter it stated that “lady guests are most welcome”.

The Menu was;
Timbale of Salmon with Lobster and Chive Sauce
Breast of Chicken with Wild Mushroom and Cream Sauce
Delice of Chocolate
Coffee and Truffles
Served with Chardonnay La Fortuna 1997 and Chateau Haut Rian 1995
£41.50

30 Members and guests enjoyed a very informative tour of this, at the time, the oldest surviving manufacturing company in the UK (Established 1570). 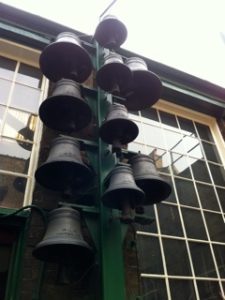 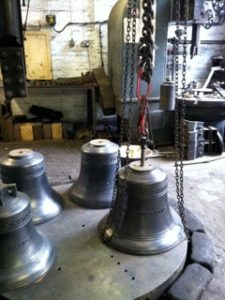 This was followed by an early Buffet Lunch at The Aldgate Exchange in White Chapel High Street.

The Service was led by the Rev. Nigel Beynon
Hymn Praise to the Lord the Almighty the King of Creation
Psalm 90 verses 1 – 17 – The President Alderman Michael Everard CBE, BA, DSc
2 Peter 3 verses 1 – 10 – The Master
Hymn Father hear the prayer we offer
Hymn Lift up your hearts, we list them Lord to thee

The Hymns were the same as the previous year (“it is good to have Hymns that people know”).

The Crypts
89 Members and Guests enjoyed a convivial occasion in the presence of the Lady Mayoress, The Lady Levene of Portsoken and in addition the wife of Sheriff Brian Harris.

The soiree had the aim of helping Ward Clubs get to know each other better and work more closely together. A good cross section of Ward Clubs attended

N.B We were officially entered as Lime Street and Cornhill Ward Club. 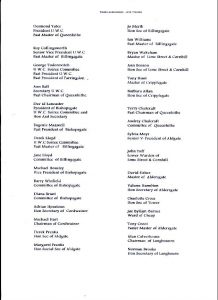 A  short formal letter of congratulations was sent by the Master, congratulating him on his forthcoming wedding to Miss Rhys Jones.

The Master and 19 Members attended

Insurance
It was reported that there was a Scheme available for Livery Companies but that the Minimum Premium was far too high for the Club to contemplate.

Recommended that The Master insures the Club “Jewel” under his/her Household Policy as a specific item for his year of office.


Civic Lunch
Discussion on the costs of the event to the Ward Club. Issues such as that in this year at least, half term, Friday, World Cup Cricket probably influenced attendance. Suggestions to move it to an evening were rejected. Suggested that if it was possible in the future to avoid half terms and Monday or Friday, and “please keep it in the Crypts”.

Apparently it had been reported that in the future the Lord Mayor of the year, would only attend every other year, with the Lady Mayoress of the alternate year attending in place of the LM.

Appeal to Life Members for additional funds.
Lord Mayor’s Show
Likely costs
3,000 Fee for participation
2,000 costs or Transportation
2,000 “Dressing costs”
Possible that costs for the float might be lower (Mark Gubbins investigating) but that “Dressing cots might be higher.

30 Members and guests paid a visit to the Home of Cricket – the tour included a visit to the Museum , the Long Room and the Lord’s Tavern for Supper (Salad, Char grilled Tuna and Lemon Tart) £23.50

Our label system was transferred over into “Word”. “It is nice to know that we are up to date”

35 Members and guests enjoyed a fascinating presentation from the Ward’s Alderman and Club’s Vice President about his year as Sheriff and the start of his year as Lord Mayor Elect.
£8.00pp

29 people in attendance of what would have been an informative and interesting evening – unfortunately – lists of wines chosen….. to come

At least 47 people attended our Annual Carol Service, led by our Chaplain Rev. Neil Benyon which was followed by supper at City University Club. £23.50pp

56 people turned out for the Walk along the Bounds of our Ward, starting at the Lamb Tavern and  ending up at The City Flogger – it was led by Mr Paul Taylor a City of London Guide

Master and 23 Members in attendance
Insurance
Mark Gubbins reported that the United Wards’ Club were willing to circulate all their Associated Ward Clubs to see if there was interest in seeking insurance for their “Jewels” – Public Liability ….. via the UWC.

No information on who attended but would have been a fun day out. Visit to the pitch, stands museum and a light lunch in the East Stand

Bryan Died 5th July 2013,at the age of 84. A Memorial Service was held at St Mary’s Church Reigate. Past Master (and Hon Sec) Ann Benson represented the Club, with other members also attending. A great supporter of the Lime Street Ward Club.