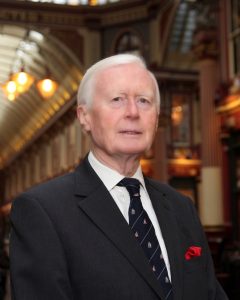 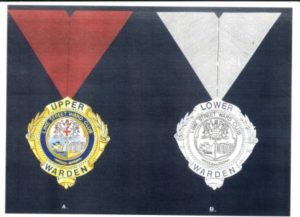 Finances. The Treasurer reported that whilst the Club was in a good financial position 2 things needed to be remembered
– A major expense (Lord Mayor’s Show) was looming
– Our Cash position hid the fact that this included the Life Members subscriptions. Likely an increase in subscriptions in 1999

Donations for the coming year as follows were proposed and agreed.
St Peter upon Cornhill 250.00p
Lord Mayor’s Appeal 200.00p
Sheriffs and Recorders Fund 100.00p
This was going to be dropped as was not seen as an Annual donation. Debate ensued and it was agreed to reinstate formally as an Annual Donation.
Master’s Charity 50.00p

Guest Speaker
Mr James Davis CBE, MA, FCIT, FICS, FRSA a leading figure of the Shipping world and apparently a very entertaining speaker (“I hope you are not seeking great gravitas from me on this evening”)

With the active support of our Alderman and Sheriff David Howard a visit to this fascinating and intimidating building was arranged for almost 50 people (Max 40 :)) The guided tour was given by “The Secondary of London and Under Sheriff” Group Captain John Constable (what a name for the equivalent of the Chief Administrator of this Court. The title was dropped in 2018). After the tour of the building, No 1 Court and the cells, Dinner was held in the Judges Dining Room.
£21.50pp

96 Members and Guests attended this year’s Civic Lunch in the presence of The Lord Mayor Richard Nichols and the Lady Mayoress.
They enjoyed;
Fillet of Red Mullet and a bed of exotic leaves with a Lime Butter Dressing
– Chardonnay Laroche 1996
Lamb cutlets Reform – La Serre Cabernet Sauvignon 1996
Sorbet and Ice Creams in a Brandy Snap Basket
Coffee and Mints – Croft LBV or VSOP Brandy

Master and 15 members in attendance.

Rule Book – ready to go out. Decided in the end not to issue as a Book but in A4 format

Insurance – no further action had been taken re investigating this. Agreed that Member Mark Gubbins would investigate and report back

Civic Lunch
Our Vice President and Sheriff was put in a slight quandary re his toast to the health of the Club on behalf of the Guests being both Member and Guest. The Lord Mayor suggested that he made his speech standing on one leg. (Did he?).

The Hon Sec highlighted one of the  problems of venue and date was that the Mansion House only finalised the LM diary 6 months before the event, the Guildhall took bookings 18 months in advance – a variation of this problem has persisted right the way though to the 2020’s.

Agreed re the format of the Rules be on A4 paper

Agreed in principle to propose an increase in membership subscription from 10.00p to 15.00p given likely outflow of funds shortly.
Suggested that consideration be given to asking Life Members to make a donation to Club Funds

36 Members and Guests enjoyed Middle Temple Sparkling Wine, Seven “English Cocktail Dishes” in this beautiful garden set inside Middle Temple. Apparently there was a competition for the best dressed “flapper” – no news on who won unfortunately. £24.50pp

A relaxing Family day out at Past Master Wilfred Archibald’s lovely house in the middle of the Sussex countryside. Members and their guests revisted Deakes Mannor after a period of 5 years to enjoy a Barbecue and stroll, sit, play croquet, golf, tennis or swim.
Sounds like a lovely relaxing day out. I wonder if the weather was good ?

The Journey was led by Committee Member Mark Gubbins and included 3 white wines, five red wines and Champagne to finish, all accompanied by matching cheeses. The beautiful Coopers’ Hall, a classic Georgian House would have provided a perfect backdrop to what was a very entertaining and enjoyable event for 32 Members and guests.
Cost £20pp


Committee Meeting 14th February
Insurance
Mark Gubbins reported on progress to date in his investigations and that he would report further at the next Meeting.

It was agreed to present Rev Coombs with a Silver paper knife. Obtained by the Asst Hon Sec. .

A replacement representative on the City of London Conservation Area Advisory Committee needed to be found after the retirement of Mr Nigel Warner after 11 years, following his move to the West county.
This Committee  does not get many mentions over the years, but one which the Ward Club definitely had a representative through to the 200’s.
“The Committee has a genuine influence on the shape and structure of the City, seeing and commenting on all Planning Applications prior to the main meeting of the Planning and Transportation Committee”