AGM
Election of Committee – an actual Election – 5 Candidates for 3 places.
Each Candidate had to introduce themselves – voting slips provided…..
D Brown
J Tuff
B Wakeham were elected..

It was proposed by Past Master David Bridges that the subscription be raised- the following year. Deferred for discussion.

Dinner
Guest Speaker Dr Richard Gilbert, FhD. F.R.C. Path, Director of the Food Hygiene Laboratory.
“The reply to to the Toast to the Guests was very amusing. “I remember being puzzled by his allusion to wild parties at my flat, all I can say is i can’t have been there”!! – Elizabeth Rogers

Lady Members were specifically mentioned in the invitation.

“Although there were constant arguments at the top table about whether we were eating Veal, Turkey or Chicken everyone enjoyed the Dinner”
Elizabeth Rogers

From at least 1991 and probably some years before our membership data base was stored on an office mailing system. Bevs.
– name of the system? or the name of the person who input it?
Still going in 1998 and later – see example below 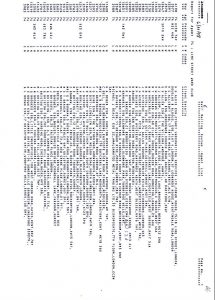 A welcome was given by The Rev’d John Cross (MA), Priest in Charge and Chaplain of Lime Street Ward Club

Hymn 439 Tell out, my soul, the greatness of the Lord

Civic Lunch – The Crypt – Guildhall
Guest of Honour – Lord Marshall of Goring Kt, CBE, FRS
Unfortunately the Lord Mayor and Lady Mayoress were away in South Africa and unable to attend.
144 Members with Guests enjoyed;

This annual event was supported by the Traders of Leadenhall Market. 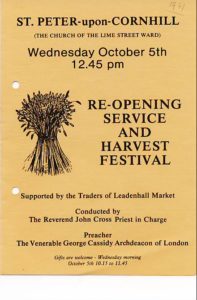 The collection was made to help cover Church expenses, remembering that the Church had basically been shut for three years whilst major restoration work was carried out.

50+ members and guests – split over 2 separate evening enjoyed a Tour of this very specific sorting office just near St Pauls. The visit included Including a visit down to the Post Office’s own fully automatic underground system (for post not people), that ran from Paddington to Whitechapel. The evening finished with a excellent Buffet at King Edward street as well.

N.B. The railway was closed down and left for some years. A new Postal Museum was created at this site and opened in 2016 including trips for PEOPLE on these same trains. The Ward Club in Master Robert Howard’s Year were one of the early visitors. 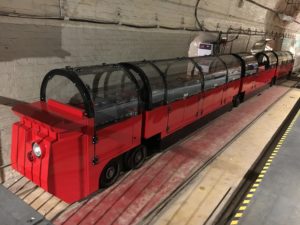 The Wheel of Fortune. A Ward Club Standard for many years, was put to good use again.

Noted that Mr Charles Rawson (Hon Patron) and Mrs Rosemary Rawson ( Hon Member) had decided that it was time to retire from the Ward Club. They wished the Club well for the future.

Agreed that 4 weeks notice for advice of events was too short and that in future it would be 6 weeks. (Reverted back to 4 weeks at some point in the future).

It was proposed that a New Rule book be issued, incorporating the various changes over the past few years. The Hon Sec pointed out that he had many copies of the old rule book that he updated to send to new Members. A member, Mr P West, a printer offered to reprint the books for the Club. his generous offer was accepted.

Supper
It had been suggested at last year’s Committee Meeting that it would be good for the Committee to get together socially and thus get to know each other better. this was the outcome – Reynier’s Wine Bar. A very convivial atmosphere, small vaulted cellar with racks of wines for sale at retail prices. If bought for consumption on the premises, a small corkage. At lunchtime a simple buffet of Charcuterie and Cheeses to go with one’s choice of wine. A really good spot for lovers of wine and simple food.

Given the size of Reynier’s – no guests allowed.