The Master, Vice President and 30 Members were in attendance at the AGM, held in the Court Room of the Tallow Chandlers’ Hall

At the opening of the AGM The Master presented our President Alderman Sir Charles Bowman with his newly  created President’s Badge. 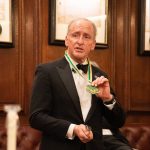 This had been designed by Past Master Peter Cave and is based on the Lime Street and Cornhill School Banner in St. Peter’s Cornhill

Later in the proceedings it was announced that The President and the Vice President had agreed  to swap roles every year with Alderman Robert Howard being elected as president for the forthcoming year .

They heard a report on his year from the outgoing Master, Ivor Cook, our Treasurer Mr  Chris Otter who was pleased with the overall finances of the Club, especially after many of the events had been held ‘virtually’ due to the Pandemic. 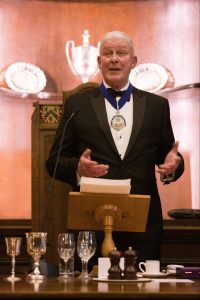 They saw the installation of Norman Chapman , as our new Master

With Mrs Daphne Cave retiring after over a decade as Hon. Secretary, Mrs Patricia Dinsdale (Past Asst. Hon Sec.) was elected as our new Honorary Secretary.

At the Dinner a really warm welcome was given to our new Master- Norman Chapman by the 59 in attendance.  In addition to Members and Guests, there was a very supportive family group, who really enjoyed themselves.

Immediately after Grace given by Past Master James Cross, the Master made a short speech of introduction, touching on his chosen charity for the year ”Second Sight”   and had great pleasure in presenting Ivor Cook  with his Past Masters Jewel and introducing our new Upper Warden, Philip Somervail and Lower Warden, Dr William Otter.

The Master’s Guest speaker, who proposed the Toast to the Lime Street and Cornhill Ward Club on behalf of the guests ,  was Mr Ian Seaton MBE, known by many members as a very respected Common Councillor for the Cornhill Ward

Changing of the Horseguards

For members who arrived early, they were able to watch the Changing of the Queen’s Life Guard which takes place daily on Horse Guards Parade , prior to the guided tour in the Museum .

In the Museum, the Guide explained that it dated from 1750 and is still the headquarters of the Household Division, in which the Household Cavalry has performed the Queen’s Life Guard in a daily ceremony that has remained broadly unchanged for over 350 years.

The Guards have two roles: as a mounted regiment (on horseback), they guard Her Majesty The Queen on ceremonial occasions in London and across the UK and are a key part of the Royal pageantry; as an operational regiment they serve around the world in armoured fighting vehicles. They currently have units deployed on active service in Iraq and Afghanistan. Their fighting capacity is matched by their strategic role in international peace keeping and humanitarian operations.

The Household Cavalry Museum is a living museum about real people doing a real job in a real place. Through a large glazed partition we were able to see troopers working with horses in the original 18th century stables.

The experience came alive with compelling personal stories, first hand accounts of the troopers’ rigorous and demanding training, interactive displays and stunning rare objects – many on public display for the first time.

After the one hour long guided tour members enjoyed a lunch with wine at The Sanctuary House Hotel Restaurant – a grand 19th-century hotel and Fuller’s Ale & Pie pub in the heart of Westminster .

The perfect end to a very enjoyable event . !!

The third event in the Master – Norman Chapman’s year was a Guided Walk down Fleet Street . Despite the heavy rain and disruption on the Undergound Trains – only two members were unable to attend the event . A  City of London and Westminster Guide, Debbie Pearson  who has a wide knowledge of this subject, guided us through the Stories of Fleet Street .

Called the Street of Shame, we found out that there’s more to this road between the City of London and the City of Westminster than its newspaper heritage.

Fleet Street has a fascinating history – from printing and publishing, via diaries and dictionaries, to monarchs and monks. Once the center of London’s newspaper industry, Fleet Street is one of the city’s most storied locations. At the top of the street there is the Royal Courts of Justice, the UK’s highest court, also known as Old Bailey. Also here is the historic Temple Church—built by the Knights Templar and featured in Dan Brown’s novel The Da Vinci Code.

We walked along narrow lanes south of St Paul’s Cathedral, learned about the important Blackfriars’ Monastery and come across a 17th century livery hall. We heard stories about Bridewell Palace and Hospital and the infamous Fleet Prison and saw a plaque to the renowned writer Edgar Wallace. Debbie  explained  about the dominance of the newspaper barons and compared the architecture of the impressive Daily Express and Daily Telegraph buildings.

Samuel Pepys, the Englist diarist whose famous diary has left us with a unique insight into 17th century life, and Samuel Johnson who wrote the first English Dictionary  – and his cat Hodge!.

Debbie gave details about another hidden place of worship, the Whitefriars Priory. We also found out all about the infamous Sweeney Todd, the Demon Barber of Fleet Street.

The heavy rain held off throughout the walk and following an extremely interesting and detailed guided tour, the group adjourned to the Old Bank of England Restaurant for a well deserved glass of wine and an enjoyable Supper.!!