In the City of London., this was a very special year. At the Sheriff’s Election, Lady Donaldson was elected as the 1st ever female Sheriff (who of course went on to become the 1st ever female Lord Mayor).  Our Master was invited to her Shrieval Badge and Chain presentation on 22nd September at Middle Temple Hall. It was also announced by the City, that the expression Sheriffs and their Ladies would be replaced with Sheriffs and their Escorts.

Bill Kelloe, many years later was still very fondly remembered as a hard working, conscientious supporter and promoter of our Ward Club and the Red Cross. Obviously very popular and well known in the City. This will be shown in the entries below. He also, it would appear was a careful keeper of Invitations, Menus….. which also will become apparent as we go through his year.

This is the First Ward Club Master, where we do actually have some real background to him. A Marine Insurance Broker through and through.
1928-36 – A.W.Donaldson (Lloyd’s  – Marine Broker)
1936-38 – Grey Dawes (Lloyd’s Broker – PandI (Protection and Indemnity Clubs – Shipowners Indemnity Mutuals)
1938 – 1975 – Alexander Howden (Lloyd’s Broker – Shipping and Marine Insurance)
– during the war years – RAF Equipment Section

No major items for discussion but,
100th anniversary of the opening of Leadenhall Market. It had been suggested that there might be a Centenary  Festival. A Committee was created including representation from the Ward Club. Overall no interest so the idea was dropped!

Membership (paid)  180 approx
Dinner was in the Captain’s Room – Lloyd’s and guests (Men only) included
C.D.D Gilmore – Member of the Committee of Lloyd’s
James Keith C.B.E – Past Chief Commoner
The Guest Speaker responding to the toast to “Our Guests” was Michael McKenzie, Court Administrator, Central Criminal Court. Apparently an amusing and entertaining speech.

As the Club President and Ward Alderman (Christopher Rawson) could not attend the Meeting the Club arranged for a telegram to be sent to him and his wife. 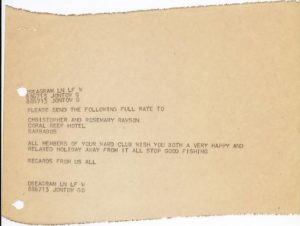 “All members of your Ward Club wish you both a very happy and relaxed holiday away from it all STOP Good fishing STOP Regards from us all.”

The traditional Annual Church Service was led by Rev. Alan Cook – the Rector
Hymn Immortal, invisible, God only wise
Lesson – The Alderman
Lesson  – The Master
Hymn City of God, how broad and how far
Sermon
Hymn Thy hand, O God, has guided

The Master obviously enjoyed it – “nothing less than magnificent can describe the efforts of you and your staff in making Tuesday’s Luncheon such a resounding success” – letter to the Caterers (Paynes). 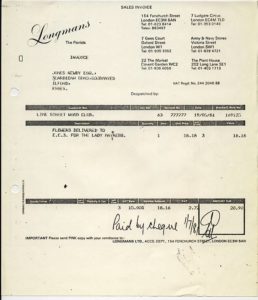 “One of the most attractive of the Livery Halls and an ideal situation to entertain your Ladies”
37 Members and 97 Guests enjoyed lunch and I presume the talk. See letter below.

Speaker, replying on behalf of the guests J.H. Dermit – Clerk of the Chamberlain’s Court – “The Freedom of the City of London” 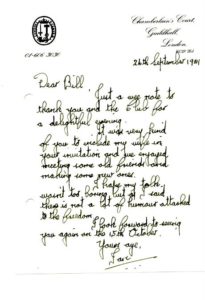 “…. there is not a lot of humour attached to the freedom” 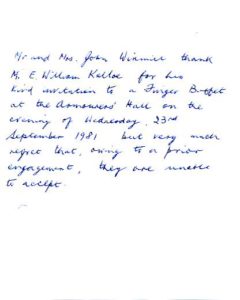 The annual invitation to our next door neighbour’s Annual Luncheon. This was held in the presence of the Lord Mayor and Lady Mayoress together with the Sheriff Elect – Alderman, Lady Donaldson. Sung Grace – from Laudi Spirituali 1545.

An annual event hosted by the Lord Mayor at the Mansion House with the aim of bringing together Ward Club Members and their Ladies, guests and friends. Finger Buffet, small Orchestra. The Sheriffs, their Ladies –  many Aldermen and their Ladies were in attendance.

An annual event hosted by the Lady Mayoress at the Mansion House, normally in the last week of her tenure, to thank all the people across the City for their support. 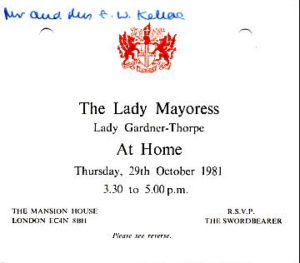 Bill and his wife would have been asked not just as Master and Mistress of Lime Street Ward Club but because of their very strong support for the Red Cross Christmas Market.

One of the more important Committee Meetings over the decades.

a) it was confirmed that the Ward Club would be running the “Wheel of Fortune” at the Red Cross Street Fair-24th – 25th November. This was going to be our standard for around 25 years. 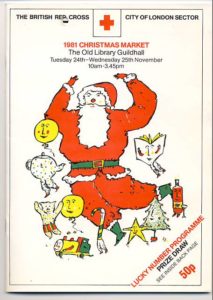 The Ward Club were I believe one of the early stall holders when the Christmas Market as it is called now was first introduced. Bill Kelloe and his wife were the driving forces for many years. The Wheel of Fortune became a standard part of the market, raising many 100’s of pounds over the years.

As far as I can ascertain the wheel was divided into segments Loose, Win….. my guess is more Looses than Wins – given the number of prizes purchased for the 2 days – see below. 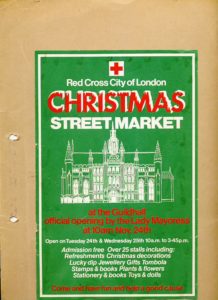 Whilst I do not think that this was a Lime Street Ward club event, as such. it is in the file and a great Invitation – sounds like it would have been great fun. 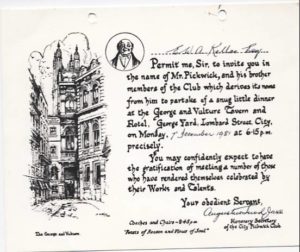 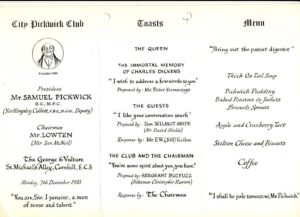 A traditional invitation to the Master of Lime Street from one of our adjoining Wards.