A summary  of our Master’s Year – events that he attended wearing his Master Badge
– not all are referred to below, as we have no further information.

The Ward Deputy (The Senior Common Councilman) had been appointed Chief Commoner for t1984/85 and it was suggested that an event such as this should be put on before the end of his 12 months tenure’. Invitations went out to all the electorate and all Ward Club Members.
The event would start with Tea followed by the showing of a NEW Corporation of the City of London, promotional film entitled “Here be Dragons”. After which the Ward Team – Alderman Brian Toye. Messrs Duckworth, McNeil, Beale and Newby would happily answer questions.

“Your Alderman and Councillors are very anxious to meet you on this occasion and establish a dialogue with the electorate on any subject that concerns them”.
Everyone attending was given a small leaflet explaining very simply and clearly the Structure of the City and role of the Corporation. The information provided and more in is in City Stories – How the City of London Works Section.

The invitation was sent out to all 50 voters (one family in Leadenhall Market had 8!), regrettably some of the voters had moved on. 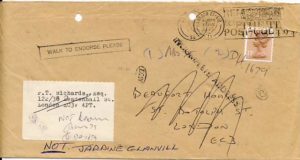 After all the efforts those attending comprised.
7 Voters and 5 of their Guests.

Our Master and his wife attended. The Lord Mayor was in attendance. This is an annual event with one of our adjoining Wards.

Venue.
In the previous year some investigations were carried out regarding the possibility of a totally new venue for this event. National Westminster Hall inside their Head Office. (Went on to be called Tower 42) Price £1,200 plus VAT. In 1985 a substantial amount. Silence.

At the AGM.
The Master reported that he had had the privilege to wear the Master’s Badge 29 times in his year.

A Rule change. Rule 10 re depositing of Club Funds that it be allowed in City Branch of a London Bank or Post Office. This was because the National Savings Accounts were paying better interest and the likelhood that tax would be deducted at source in the future by the Banks but not by National Savings

Wine in store
A tasting had taken place and the wines would be made available to members. 4.00p per bottle, Minimum 3, max 6 bottles per member. to be collected by the member.

Guests at the AGM Dinner.
Under the rules it stated “Gentlemen guests only” – thus Lady members could bring their Husbands, Gentlemen members could not bring their wives. On a majority vote it was agreed to keep the rule unchanged. 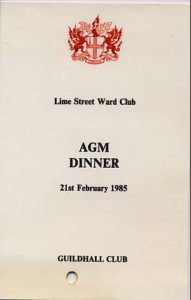 
The Ward Club was asked to provide volunteers for the Annual Flag Day around Lloyd’s. “The result of last year’s Flag Day was not successful owning to the lack of volunteers”
Did anyone take part I wonder?


The Ward Club specifically asked that we be listed as an “interested party” “given that The Rector of St Peter’s had been our Club Chaplain since our foundation and that we made an annual donation to the Church funds. The answer was basically, “we have taken our soundings, decisions have been made. The proposals will go to the Bishop who will decide if and in what format the proposals will be handled – this will then go to the Church Commissioners, who will publish the proposals giving people 28 days to raise objections…… – – it did not happen.

Breakfast in Billingsgate Market 15th May AND 26th September 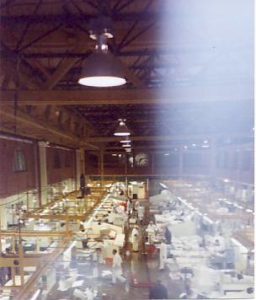 The 2nd visit was restricted to Members only. Great fun had by all, ending with a great freshly cooked Kedgeree. Repeated 24 or so years later 2009.Still a great visit.

The Church Service was led by our Chaplain The Rev. Alan Cook (Rector)
Hymn Praise to the Lord the Almighty
Lesson read by the Alderman
Lesson read by the Master
Hymn Father hear the prayer we offer
Sermon
Hymn Lift up your hearts, we lift them up Lord to thee

The Lord Mayor could not attend – he had been asked at short notice to take part in an Official visit to Bermuda. (No contest!).

In addition, “no speaker of a suitable calibre could be found”.
This is ironic in that there was a comment from Mansion House after the 1984 Civic Lunch that there had been too many speeches (5) and that they were too long.

Obviously, it was, one of “those events”. 2 complaints about people in the middle of the table not getting served anything or no veg. Resolved in the end.
However “all in all it was a great pleasure to be one of your guests, excellent luncheon. I made the mistake of going back to the office for what was left of the afternoon. I blame you personally for all the atrocious decisions I made subsequently” Director of Movements – MOD.

A special treat for our Hon Sec.

54 Members and 132 Guests plus 14 Ward Club Guests enjoyed a good lunch and an interesting reply to the Toast to the Guests by Brigadier D.V. Henchley, OBE., MA.- retired from the Army in 1963 and became the 1st Warden of Northampton Hall (the Hall of residence of Northampton College of Advanced Technology, which later became City University). 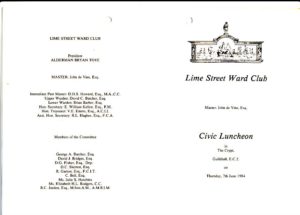 Well known Members of the Ward Club, applying very late…… !! (- things do not change :).
“Thanks for your letter, I now do appreciate the issue of restricted numbers and prompt applications. I will have to find some means of applying earlier, given my often short notice Business Trips abroad”

Regret I have no idea how many people attended but will guess the Alderman and hopefully the CC’s – some of the traders in Leadenhall Market and some Members of the Ward Club. In the 1980’s there was still Butchers, Fishmongers, Poultrymen trading within the Market, albeit, gentrification was taking over. 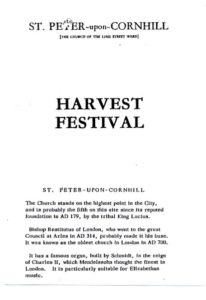 Praise. O praise our God and King
Lesson – The Alderman
Lesson – The Master
Come, ye thankful people come
The Sermon
Now thank we all our God

“it is felt that a far greater liaison between Ward Clubs is highly desirable and that the strength and friendliness thus established can only be of greater benefit to the City of London” – identical letter to last year’s and future years.

30 Members and 42 Guests enjoyed a simple evening of socialising even though;
– the Musicians booked did not turn up.
– the Caterers still charged for out-mess for the Musicians
but “the fact that we did not have to pay them their fees helped the Club, make less of a loss” , “only” £125. 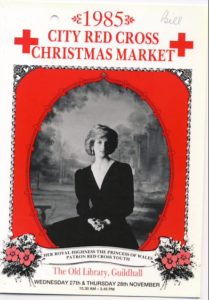 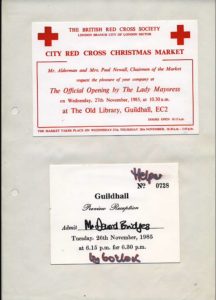 The main driving force of all this effort, Bill and Joan Kelloe numbers supporting the stall quite few.

The 4 standing Common Councilors were elected, unopposed for the ensuing year – Annual Elections.

The CBE to Henry Duckworth was announced in the Queen’s Birthday Honours List.

Master plus 15 members in attendance.

Before the start of the Meeting, The Master asked for the Club’s congratulations and best wishes be passed on to David Howard, who had recently been elected Alderman for Cornhill Ward this was endorsed with pleasure and minuted.

There was a vacancy on the Committee which someone wrote and applied for. After discussion it was agreed that someone more senior should be appointed.