A major growth in interest in attending the AGM

Honorary Members
It was proposed that Lord Auckland (sponsored Dinners at the House of Lords) and Mr Charles Rivington (Retiring Ward Clerk) be made Honorary Members. Agreed unanimously. Apiece of silver was presented to Mr Rivington

Financial Position
No Financial statements on file for this year BUT Surplus on the year of 189.09 even after paying for an Illuminated Address (55.00p) for the retiring Alderman and Vice President).
Virtually all the Ties had been sold.

Announced that the Rev Alan Cook – the Club chaplain was to marry on 19th may. Agreed that the Club would give a wedding present. Master and Hon Sec. to arrange.

A major growth in interest in attending the AGM

Honorary Members
It was proposed that Lord Auckland (sponsored Dinners at the House of Lords) and Mr Charles Rivington (Retiring Ward Clerk) be made Honorary Members. Agreed unanimously. Apiece of silver was presented to Mr Rivington

Financial Position
No Financial statements on file for this year BUT Surplus on the year of 189.09 even after paying for an Illuminated Address (55.00p) for the retiring Alderman and Vice President).
Virtually all the Ties had been sold.

20 Members and 15 Guests
The speaker at the April Dinner was Ken Ashton from FIFA. In his career both as referee and on various committees he was involved in some important footballing milestones.
He was the 1st referee to wear the now standard Black Uniform (1946)
Introduced standard colour flags for linesmen in 1947 (prior to this they had been in Home and Away colours of the competing teams)
Following an incident in the England vs Argentina match in the 1966 World Cup, (Jack Charlton did not know if he had been booked or not) as Head of World Cup Referees he devised the system whereby referees show a yellow card for a caution and a red card for an expulsion, which was first used in the 1970 World Cup.
He also successfully proposed that the pressure of the ball should be specified in the Laws of the Game and in 1974 he introduced the number board for substitutes, so that players could easily understand who was being substituted.
We have no idea what he talked about but should have been an interesting evening for lovers of football.

Very successful – 159 Members and Guests in attendance. The function should make a small profit.
An Article in City Press praised the speech made by the Master – cutting to be kept in the Club Records!!

Confirmed that a telegram had been sent to Princess Anne on her engagement to Capt. Mark Phillips.

Discussion on the Combined Ward Club Event. Whilst willing to promote not willing to include on the Ward Clubs Specific List of Club Functions.
discussion on future Hon Treasurer – Agreed that Mr John de Vine would take over at the AGM

13 members in attendance
Highlighted the next Committee Meeting in November when the Rules were to be reviewed and ‘brought up to date”
Deputy H Duckworth advised that he believed that Ward Clubs were allowed one event a year, at Guildhall, for free
– this would be this year’s Civic Lunch.
Vincent Emms was elected as a Member, amongst others, going to be an important part of the Ward club in the future

Discussion on Subscriptions and Life Membership.
No increase necessary
No desire to introduce Life membership

It was proposed and agreed that the Hon Sec. and his lady be guests of the Club at all future functions.

No information – on the House Dinner – no doubt popular.

This was held on this date rather than before the Civic Event at it was felt that the Guildhall was too far from St Peter’s, as compared to the Mansion House where the Civic had been held for a few years.

19th November – Committee Meeting – Lloyd’s
9 Members in attendance
There had apparently been a “Ladies Dinner” at Lloyd’s – successful but “lost” 80.00p

The Club had been invited by the City of London Corporation to donate a tree to the City. It was agreed that the Club should. Cost 85.00p
There was a request that that if possible it be planted within the Ward

A request had been received from Guildhall School of Music seeking funds to support the building of a New Library – agreed to donate 10.00p

An important year in the History of the Club.

“I would mention that we now have a working arrangement with Cornhill Ward which does not have a separate club of its own and we welcome as members all those of Cornhill Ward who would like to join us. We have in fact elected two Cornhill Members onto our committee and look forward to a growing and happy cooperation between the two Wards. Sir Edward Howard, Bt. has now joined the Club as a Member.”

“Gentlemen Guests, will be very welcome”
At the AGM Amendments to Rule 18 and 19 were proposed allowing for up to Nine Members on the committee in addition to the Officers.
It was also proposed that there might have to be an increase in subscriptions next year, even though the Club was in surplus. The Membership Fee of 2/10/0 had not been increased since the Club was founded in 1946.

Events planned for the year
15/5 Civic Lunch – Guildhall, Livery Hall, Speaker Rt.Hon. Vincent Monckton of Brexley CB. OBE. MC.. It was originally planned for this to be at Guildhall but was finally arranged in the Livery Hall.
In his speech of Welcome the Master emphasised vital role played by the City in National affairs and how it was up to everybody to support the Lord Mayor and the Corporation in an active manner. The Lord Mayor in reply emphasised the vital role that Ward Clubs played in encouraging close contacts from the grass roots of the Ward Club up to the top echelons of the Corporation.

Very well attended. Leaflets had been put out about the Guildhall itself, appreciated by many who attended.

10 Members in attendance
Noted that the Master would plant a tree in Fen Court  – the Ward Club had donated 85.00p to the City of London Corporation, as part of their ‘plant a tree” campaign.

Prior to the Committee Meeting below, the Master had planted a Magnolia in Fen Court as part of the City tree planting initiative that the Club had supported.
The Club had planned to plant a Lime Tree but apparently the soil was too dry. The Master, two Wardens, The President, The Ward Deputy, Alderman Sir Edward Howard Bt, Two Deputy Chairmen of Lloyd’s and others were there as well.

The Master was congratulated on sending out a News Letter to all Members, keeping them abreast of developments. It was felt that this was a good initiative that should be continued. (Was, very occasionally done over the next decades).

Noted that the Master would plant a tree in Fen Court  – the Ward Club had donated 85.00p to the City of London Corporation, as part of their ‘plant a tree” campaign. 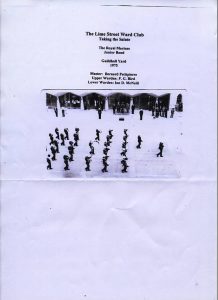 Master reported in on the Tree Planting – see above

Hon Sec Reported in that the Civic Lunch had gone well and that the LM had specifically noted that the event had run to time – in fact finished 2 minutes early.

Hon Sec reported that he had a new addressing system that would help any future Hon. Secretary.