Reported that the Combined Wards Banquet, very successful
Hon. Sec to go on the Organising Committee.

Around now it seems that more events were being organised than in the past and an Entertainments Committee had been put in place to help set up and organise all the events – it quietly faded away!. A pre-cursor of our Events Sub Committee (ESC) set up in early 2000’s, which faded  away!, only to be resurrected a few years later (2019) as the GPC (General Purposes Committee). Its purpose in 1970 as later, to share the load of organising events. 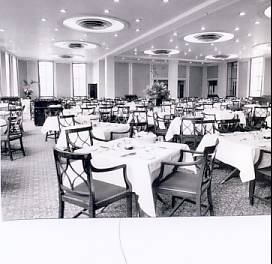 
The Committee discussed arrangements for;

Headed Notepaper
Questions were raised about the quality of the notepaper being used by the Club – new paper was ordered.

For more information on the story behind our notepaper and Banner Header click here.

Discussions took place regarding who would Chair the Combined Ward Clubs Event Committee – still under discussion but NOT to be the United Wards Club
Suggested that a specific leaflet showing the events for the year be published. (A draft was shown to the Committee). To be pursued.

Civic Lunch – Mansion House  in the presence of the Lord Mayor (Lt Col Sir Ian Bowater D.S.O.,T.D., DSc ) and the Lady Mayoress. The response on behalf of the guests was given by The Dean of St Paul’s – The Venerable Martin G. Sullivan O.M.G., O.B.E, M.A.
It is interesting to note that the objectives of the Club as prepared in a note for the Lord Mayor were seen as “To promote friendly intercourse within the Ward, discussion of local and general affairs of the Ward, and to dispense parochial information”

Caterers (“once again”) Ring and Brymer (Birches) of Sun Street. 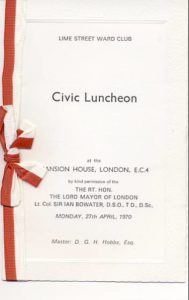 There was some discussion about the costs of the Lunch, it maybe that the Caterers cutback somewhat? 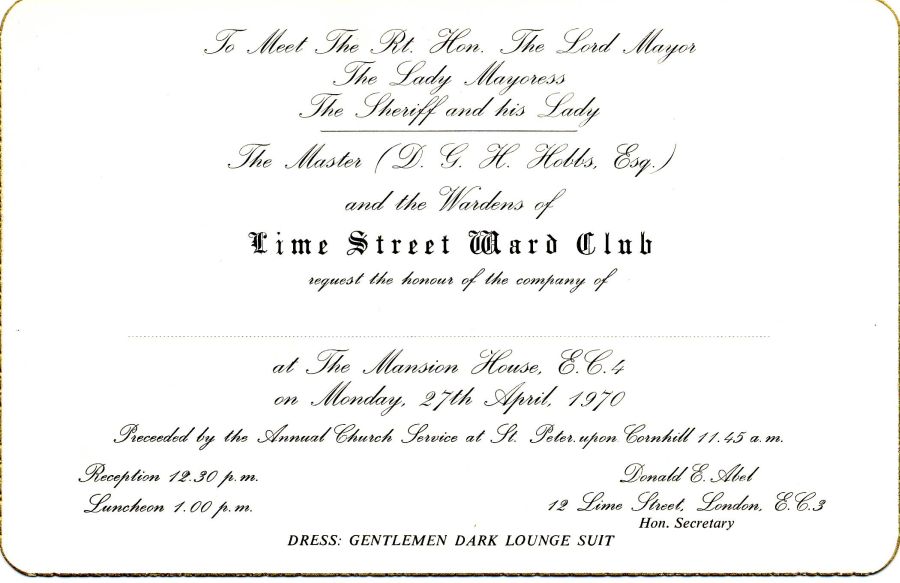 “Salmon and Strawberries much more expensive in April than June” plus in addition it had been decided by the Caterer (Ring and Brymer aka as “Birches”) to add a further 10% as a service charge.  In the past year the Catering Industry has suffered from rising costs of food., liquor and wage costs so we have no alternative to increase our prices in addition….10% Service charge! – we suggest a Buffet”

Many thanks to Jim Attridge a Member for sending this into us for our archives – greatly appreciated – we wish more people would:).

Written in the early 1400’s, Around the time of the Wars of the Roses. Some of the earliest surviving drama written (written in verse) in English to teach the stories of the Bible. At this time the Bible was still only read in Latin. 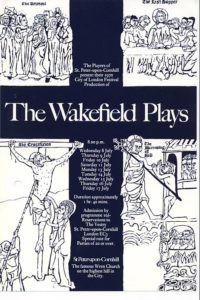 Q. A Member asked for the Club to support an objection to the rebuilding of George and Vulture, Simpsons and The Jamaica. It was being  proposed that all these three buildings be knocked down and a new Office Block be built in their place.
A. The Committee felt that the Ward club could do nothing.

Robed or NOT?
Q. Should all Common Councillors be robed for the Annual Harvest Festival at St Peters’?
A. Only those from Lime Street as it was a service for Leadenhall Market and Lime Street Ward.

For Members of Ward Clubs, their Ladies and Guests. The Lord and Lady Mayoress attended.
Price £7.4.0d per person.
Full evening dress preferred (White Tie and Tails), for men, with long dresses in preference to short for the ladies. 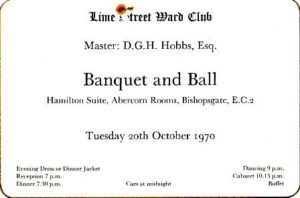 Very good feed back (“should become an annual event”)

N.B. Discussions at various Committee Meetings re issuing of tickets for individual events – raised at least 4 times – answer every time “At no time has a ticket been issued for an event in the past”! – Still isn’t in 2021 🙂

Things discussed (1st copy of Minutes of Committee Meetings so far found) included;
Plan to demolish George and Vulture and Simpsons had been withdrawn.
Photo of Club Badge had been approved and submitted to City of London Records.
Finances in good order
Planned social activities for 1971 were announced

New note paper. Various possible drawings were submitted. It was agreed that as the Ward had no City Gate or Church it would be based around a drawing of the fascia of the East India Company House, which had been in Leadenhall Street for many decades – this is still the heading on our note-paper and on the opening page of this Web Site.

The creation of a Social Committee was proposed

A Blow – Letter received from the Mansion House – making it extremely clear that the 1971 Ward Club Lunch would be the last time that the Ward club would be able to use the Mansion house for such an event. “…..given the reduction in Mansion House engagements. “Please make note of this and let me know should you, in future years have some special event that makes it desirable for this decision to be reversed.” 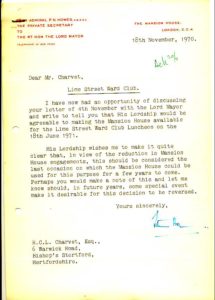