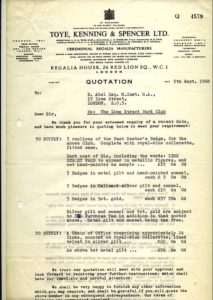 The interesting item is the Chain. I am not sure that this was ever purchased (2020). Further investigations may reveal that it was, if so what happened to it:) 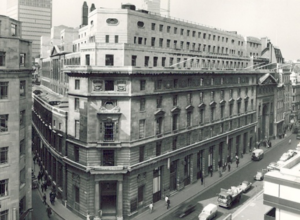 Dinner was held in the Captain’s room in the “New” Lloyd’s Building. (1958 Building) 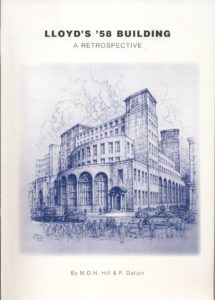 61 Members were in attendance at the dinner, with 78 Guests
Guest Speaker – Mr Dickson-Wright
Cost of the Dinner – 37/6p

9 Members in attendance, including Rev Alan Cook (the Club Chaplain)

A Member resigned owing to an “incident” at one of the Tables at the previous House Dinner. A lengthty discussion followed. A letter to be sent to ask him to re-condsider.

Further discussions were going on among Ward Club Clerks re the possibility of 1 Specific event for all Ward Club Members, that the LM would attend.

Having suggested that the Club only have one Act at the Ladies Night, it transpired that a Contract had been signed for a Cabaret. Steve Merrick, Troubador and Bobo and his Transfer Line(?). It was suggested that the Bobo Act be omitted. Agreed not possible, so there would be two Acts.

A Member Mr Kenneth McNeil had been appointed Sheriff – agreed to make a donation of 5/5/0d (Five Guineas) to his chain appeal but that NO Illuminated Address would be sent.

Quite a long discussion re obtaining a chain for the Master’s Badge, Metal or Silver Gilt. Decided in the end to stick with the Blue Ribbon as any chain would detract from the Badge itself.

AND an Emergency Committee Meeting

The President called an Emergency Meeting to propose that as the Ward Club had two Members who were Sheriff elect and Lord Mayor elect that the Club should be presenting Illuminated Addresses to both of them (Not what the Committee had agreed a few months back). They had to be ready by 9th November.
Agreed that the Club would spend 20 Guineas (21/0/0d) on the Sheriff’s and 31/10/0d (30 Guineas) on the one for the Lord Mayor.

As agreed at the Emergency meeting, Illuminated Addresses were prepared and presented to the the incoming Sheriff and Lord Mayor, by The Ward Club President, Master, IPM, Upper Warden and Lower Warden – a very impressive ceremony.

Club Subscriptions
Although the Club had 110 Members only 50 were fully subscribed. 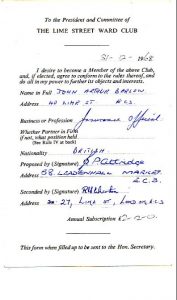 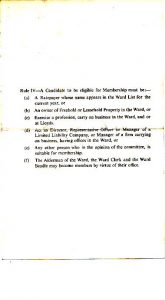 An example of the Membership Application form of the time