Master Harvie Peebles
An Egg Merchant and Liveryman of the Worshipful Company of Poulters (Master to be). Involved in both importing and exporting of eggs, working mainly with Hotels. Restaurants, Catering and Food Factories. Traded for more than 50 years in the London Wholesale Market. A member of the Conservation Area Advisory Committee

The Master and 42 Members participated.

Announced that a New Sub-Committee be set up, Chaired by Peter Cave with its main aim to support the Master and the Hon Sec in the organising of events and thus spread the load.

It was proposed and agreed that Lord Levene and Mrs Joan Kelloe be re-elected as Hon. Members and that Mr Edward Kipping (retiring Ward Beadle) be elected as Honorary Life Member. It was noted that Stephen Kipping (Edwards son) was to be appointed as Ward Beadle.

77 Members and Guests enjoyed excellent food, wines and company at the Army and Navy Club (The Rag), with much thanks being owed to Lower Warden Stanley Liu for facilitating this event at such a prestigious venue.

Not an overly successful event, low turn out, a shame

The visit to Saddlers’ Hall was arranged with one of the Ward Club’s members, Keith Marsh, as the Hall Manager and Beadle of The Worshipful Company of Saddlers.  We were given a tour of the neo-classical style Hall built in 1956/58 on the site of the first Saddlers’ Hall which had been established around 1400 in what was known as “the saddlery” between Cheapside and Gutter Lane.  Keith Marsh also talked about the saddlery craft which flourished in London in the early Middle Ages and about the history of The Worshipful Company of Saddlers.

After the tour and talk he split the group into pairs, gave each a list of questions and a “treasure hunt” ensued to find the answers amongst the display cabinets, period furniture and paintings.
We were also shown some of the Company’s important pieces of silver and during a talk on the items we were privileged to be able to inspect these closely and ask questions.

The Service was led by our Chaplain Rev. Mark O’ Donoghue and included:
Hymn Morning has broken
Lesson Isaiah 25 Vv 6-9 – The President
Lesson  Luke 14 Vv 15-24 – The Master
Hymn  Praise to the Lord, the Almighty, the King of Creation

The event held in the presence of the Lord Mayor who had just returned from a very successful visit to India, leading a business delegation and the Lady Mayoress was a great success not only for the 105 members and their guests, but also for the Lord Mayor who had been impressed by the Club’s organisation in getting him out on time.

The Guest Speaker who replied to the toast to the Guests was William Beaver, speech writer to the Lord Mayor, with responsibility for all face to face communications of the Lord Mayor and the Sheriffs domestically and globally – in the region of 800 speeches an year.

Both our President and the Club made separate presentations to our retired Beadle, Mr Edward Kipping, in commemoration of 40 years service to the Ward.

To the Club, ” may I take this opportunity to thank all the Members of the Ward Club for your help and assistance over the years in my role as Beadle, it is a great sadness to retire” – Edward Kipping
To the Lord Mayor “time stands still for no man and I just could not continue in my present state of health and would not wish to let you down. Your gift ( Silver photo frame with both the arms of Sir John and the City of London, with a picture of Edward K keeping a watching eye on Sir John in his Lord Mayor’s Show, last year). I will treasure for ever” – Edward Kipping

In closing our President made a “yoke” at the Master’s expense, saying;
“Master, if I might say, with a highly successful career in the poultry trade, your speech today was, absolutely cracking. In fact we were quite shell shocked. You are clearly laying the foundations for a successful year. Who knows, you might even be plucked for higher things. But please don’t crow about it, even if today you are quite cock a hoop.” 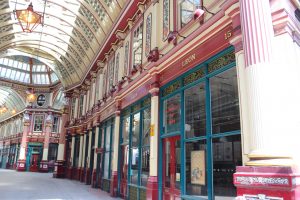 The walk for 39 Members and Guests was specifically devoted to the Market itself and the area around it.
Our guide – (a Member), Ross Knox-Homes provided a great deal of information about the Market and its history, and the Buildings and Churches in Leadenhall Street and around the new Willis building – he was extremely well informed. 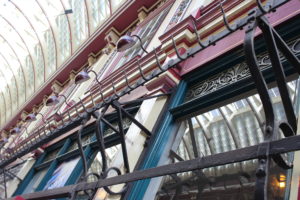 The walk finished with an excellent supper at the Brokers Wine Bar.

Congratulations were formally given to Elizabeth Rogula for being elected as a Common Councillor for Lime Street Ward and to Past Master Christine Cohen on her becoming Master of the Gardeners Livery Company.

Hoping to be able to help out on events such as the Wine Tasting, Red Cross Market, Carol Service….
Initial discussions were in hand re the creation of the Ward Club’s Website

The Hon. Sec announced that she was standing down at the end of the year but would take on the role of Asst Hon Sec, in the short term, whilst a replacement was found.

A letter was circulated to the Membership with a job description.

“The role requires a keen interest in the Club, and organizational mind , a fair degree of patience and basic PC skills( technology not political correctness) including email and Internet access.
Ideally the person will work in the City as experiences show this is beneficial when learning the ropes.”

The Chairman of the ESC, Peter Cave, volunteered Daphne Cave (he had not asked her at this point!!)

James Cross suggested that as there were places for two brass plaques outside St Peter’s that the Ward Club and the Poulter’s might provide same. Cost around £200

Past Master Mark Gubbins took us through a range of Italian Wines, Whites, Reds and a sticky. A very popular event  with 42 people packed  into this quite small restaurant. 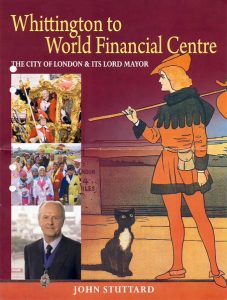 Many gifts were donated, specifically for Children under 5. All of which went to the Good Shepherd Mission – Bethnal Green, who were absolutely thrilled to receive and distribute them among the 50 of so families in dire need, who attended their Parent and Toddler Parenting Groups.

Committee Meeting – Jan 2009 – likely to have been, The Bunch of Grapes – Lime Street.

Announced that Mrs Daphne Cave will take on the role of Hon Sec in 2010, staying as Asst Hon Sec for 2009.

Report from the Events Sub Committee re the proposed website, various possibilities still being reviewed.

Major discussion on a proposed change in the rules regarding eligibility for Lower Warden. It was agreed to set up a Rules Sub Committee to report back ASAP

It was proposed that in the future the Poulter’s be invited to our Ward Club’s Carol Service and thar the Master Poulter be asked to take one of the readings. This was agreed.

City Briefing. Peter Cave suggested that we try to get the presentation, normally given to new Liverymen for our and other Ward Clubs. Agreed he should investigate and report back.

A wonderfully relaxed and informative presentation by Sir John Stuttard for 40 Members and Guests held at Threadneedles Hotel by courtesy of Club Member, Julian Payne, the Hotel’s Manager. Lovely venue, excellent Canapés, Tasty wine and a very good talk – what else could you ask for to finish off the year.

Our Master and his wife (June) represented the Ward Club at Langbourn and Aldgate Ward Clubs Civic Luncheons and the Civic Dinner of Bread Street Ward. Our Master also attended Harvest Festival and Supper and a splendid dinner at Mansion House with the Gardeners’ Livery Company where Lime Street Ward’s Deputy, Mrs Christine Cohen, was Master. It was a fine coincidence that our President, Sir John Stuttard, was Lord Mayor Locum Tenens at this event.
He also joined the Farmers Livery at their Harvest Festival and Lunch where he spent some time explaining what Ward Clubs were to the agricultural community.

His last solo event was a wonderful evening at the HAC in the company of Mr Alistair Bassett Cross.