N.B. It had been pointed out at the previous Committee Meeting that the Club could be facing some major costs in the year’s ahead – vis a vis Shrievalty and possible Lord Mayor. it was also stated the the Life Members Fund could not be seen as being “disposable”.

This concept was actively encouraged by the Lord Mayor in his year in office. and followed up again by our Master in a specific letter to all members in August. 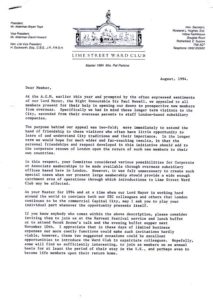 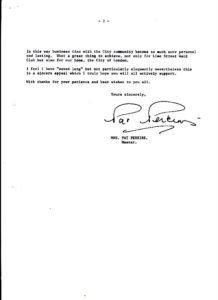 In addition the Club made a donation of £200 to Lord Mayor’s appeal for St Paul’s Cathedral and purchase of 7 “Past Master’s” Badges from Toye, Kenning and Spencer – £168 each (one past master had lost his!)

The AGM was held in the Saddle and Sirloin Restaurant followed by Dinner where 79 Members and Guests plus 3 Ward Club Guests took part. The Guest Speaker was Mr David Vermont, Past Master Mercer and a Council Member of City University

Over 50 people applied for tickets to this event (40 max) which was located just south of London City Airport. 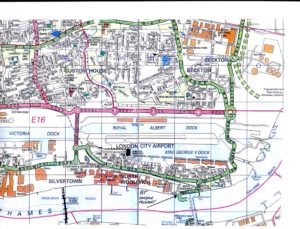 The Members and Guests who took part “toured the centre and had an opportunity to play with a collection of hands on technology exhibits”. A letter from one of the attendees (Mr H R Beber) states…. “an excellent visit, had no idea what to expect – turned out to be most interesting”
A substantial Hot and Cold Buffet was provide by BT £5.00 per person

London’s first satellite earth station was opened on a 3.5 acre site in Pier Road, North Woolwich near the old King George V Dock in Dockland 10 years earlier in 1984. It was designed to handle two main areas of satellite telecommunications business: the demand for business services from the City and the provision of transmission facilities for satellite television and radio companies.

The Teleport began operations in February, transmitting commercial cable TV broadcasts using the European Communications Satellite (ECS). It was originally called the London North Woolwich Earth Station, but was renamed the London Teleport in April, coinciding with an official visit by HRH The Duke of Edinburgh. It was opened officially in October 1984

The Teleport was sited in North Woolwich because, with the Thames at its southern boundary, the site was protected from any future high rise development which might impede the clear outlook required by the antennas to transmit and receive signals to and from satellites. The area was also free from any radio interference.

With over 50 participants and the nominal charge the Club was able to donate BT £125.00p to a Charity of BT’s choice – Children in Need.

Hymn Praise my Soul the kKng of Heaven
Lesson Exodus 3 V 1 – 14 – The President
Lesson Acts 7 V 22 – 36 – The Master
Hymn Soldiers of Christ Arise
Hymn For all the saints (Not v 5 and 7) A specific request of the Master. It was thought that 8 verses was too many.

Civic Lunch – The Crypt – Wednesday 8th June
The Lord Mayor of the time was very keen to encourage involvement in Ward Clubs by overseas businessmen to help promote the City’s pre-eminence as an International Financial Trading Centre.

The new enhanced note paper was used for the first time to announce this Meeting. On the file and still looks very clear and has impact. 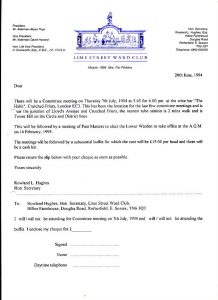 A Meeting of the Past Masters was called to discuss the Appointment of the Lower Warden – this was in the Rules but has not been mentioned once in any Minutes since the creation of the Club.

Hon Sec reported “that it is becoming more and more obvious that the Rules for Membership of the Committee were not working” The Master agreed to set up a small sub-committee to report back with a proposal.

Ties. Stock running low, waiting on samples from Toye, Kenning – not yet arrived. Looking at Silk and /or Polyester or two types of tie. Agreed that Asst. Hon. Sec and Past Master Hugh Breslin would review the matter.

The opening paragraph of the letter from the Tower of London re our proposed visit – is interesting. 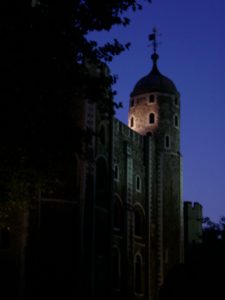 “We have to be very restrictive in allowing visits.. as we receive so many requests. Even limiting it to those with some strong City…., Tower…. connections we still have to restrict visits to not more than 1 every ten years. (our next visit was not to be for a further 15 or so years). 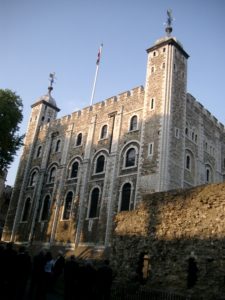 70 Members and Guests attended, the evening which included a Hot and Cold Buffet served in the Association Room of the Royal Fusiliers, and a presentation prior to viewing the ceremony.
Tickets £25 per person
Catering by Flambé

Apparently the speaker also had wide ranging interests in motoring and included some stories about the Michelin Group.

“The Ward Club Member’s interest was expressed so vocally and enthusiastically that I later understood that I had to cut many of you off in full flow – I can only apologise now,  though I recall that even so the evening lasted well into the later hours” – The Master’s Report on her year.

Ties No further progress had been made

Copies of the minutes of the last meeting were requested to be available in future for all attending, in advance. Debate about the logistics

Amendment to Rule 18 proposed and agreed “nine other Members referred to above shall each serve for three years and only be eligible for three such terms excluding time served as an Officer of the Club. The issue being that there were some Committee Members who would not be eligible for re-election before it would be there turn to stand for Lower Warden.