Noted that the Wheel of Fortune raised £750.00p for the Red Cross. Congratulations and thanks were given to all those who helped out on the stall. We were still the only Ward Club taking part.

Ideas were sought for the stall for 1987, to replace the “game of chance” and raise even more funds for the Red Cross.

59 Members and 47 Guests attended the Dinner 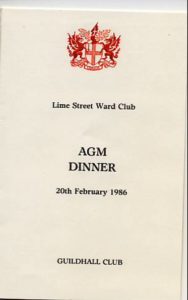 58 Members and 155 Guests plus some Ward Club Guests enjoyed an excellent lunch in the presence of the Lord Mayor and Lady Mayoress along with Sheriff Mr Jack Neary and his lady. The largest number since the foundation of the Club (40th Anniversary)

Letter sent to the Hon Sec – Bill Kelloe
My Dear Bill,
I find it incredible and in many ways sad that no mention was made of your fantastic efforts to make this luncheon today such a success. I know the amount of work that goes on behind the scenes to make an occasion as success, today was one of those occasions…………………………”

An attempt by the UWC to co-ordinate the Dates of Ward Club events to avoid clashes – the majority of the Ward Clubs attended – only exceptions Bassishaw, Candlewick, Farringdon, Queenhithe and Tower.
At the Meeting it was agreed that the UWC Secretary should be used as a clearing house for dates of Ward Club functions to avoid unnecessary clashing of dates. Ward Club Secretaries would advise their dates for the year as soon as they were known.

Ward Club Secretaries would advise UWC of all changes to Officers as and when they occur.

It was agreed that this Meeting was worth while and another should take place in 1987.

It was agreed that the Royal Society of St George and The Guild of Freemen should be invited to attend subsequent meetings.

It was suggested that on a self financing basis their should be an Annual Reception for Presidents/Chairmen/Masters and the Clerks/Hon Secs.

Reception and Finger Buffet at the HAC – 31st July 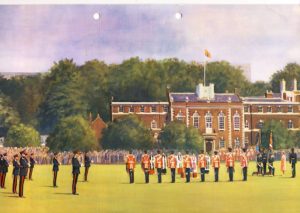 Who were the ILU?
Basically a Trade Body representing Marine Underwriters and then also Aviation Underwriters working for Insurance Companies (as opposed to Lloyd’s), in the London (Re)insurance market place. Their office at this time would have been the corner of Billiter Street (Eastside) and Leadenhall Street. For anyone old enough this itself would have been on the site of a Wine Bar called Shorts. 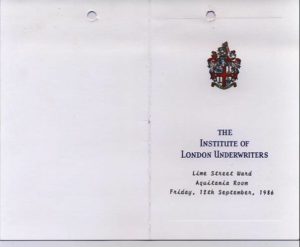 Involving our Alderman the CC’s, Our Master, the Ward Clerk, Senior Warden and Hon Secretary. The Deputy Chairman of the ILU (Mr J.A. Parton) was a Member of the I.L.U.

An evening out on the Thames – The Lady Gwynfred – from St Katharine’s Dock 23rd September.

46 Members and 17 Guests went out for the evening on this beautiful Thames Sailing Barge. 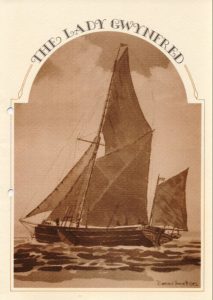 No idea what the weather was like, or whether it went well. Do know that nobody ate the Chicken Vietnamese (“Grilled Chicken with a succulent sauce”) and that the Club tried to get a refund. The Club were charged for every minute they were on board. (My guess, people hung around and carried on chatting, rather than getting off the boat). The Caterer also carried on serving wine over the pre-agreed monetary limit. (Should have gone to a Cash Bar).

Lime Street Ward, apparently had the highest number of Members in attendance, as we had in previous years.

James Newby, one of The Ward’s Common Councilmen died suddenly at the age of 59 – a Senior Marine and Energy Insurance Broker joining C.T. Bowring in 1985 having spent many years with Alexander Howden. Past Master of the Ward Club and a Liveryman of the Worshipful Company of Insurers. A Memorial Service was held for him at St Peter’s upon Cornhill conducted by the Rector and our Club Chaplain, Rev. Alan Cook.

Hymn Praise my soul, the King of Heaven.
The Lesson.
Hymn Now thank we all our God.
Hymn O God our help in ages past

His passing, led of course for the need for a By-Election.

5 Candidates stood for the 4 seats.

Our Ward Club via our Hon Sec. seems to have made it pretty clear who the voters should vote for. 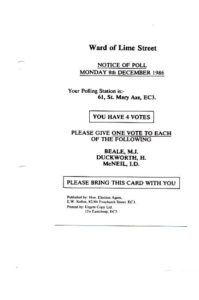 Other people had a view as well 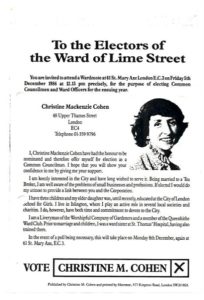 The incumbents, thought that Christine Cohen was unlikely to stand. She did and won. She became a very highly regarded and popular CC.

Long debate re the closing times of the Election – officially 8.00pm
Harry Duckworth very keen on 6.00pm
John Cohen wanted at least 7.00 as some of Christine’s supporters would not be able to get out to vote before 6.00pm.
Any change required support of all the Candidates. Final Answer 7.00pm

A very interesting leaflet was around at the time explaining the role of the Court of Common Council.and what to see in The Great Hall at Guildhall
– this and other information can be found in how the City of London Works

Ladies Badges – becoming a bit of a saga, “will be dealt with shortly”.
Wine – the idea of selling to members had obviously not worked. Plan now to try to get Guildhall Club to allow the Club to use at the Installation Dinner.

Ties
Many complaints about the quality of the material used. The Master felt particularly strongly about this.
Agreed to get quotes and samples and buy replacement ties. Decisions then about disposing of the current stock.  Currently as an asset in the PandL Account.

Collarettes
Only 1 left agreed to get quotes for 6 or so.

Annual Subscription
Proposal to increase the Membership Subscription to £5.00p (from £3.00p since 1978), to cover increased costs and encourage more Life Members. A lengthy debate ensued and by a majority vote it was agreed to put this to the AGM.

Cost of Civic Lunch
With the cost likely to be in the region of £31.00p per person it was felt that consideration be given to finding ways to reduce the ticket price.
Idea of a two tier charge for Members and Guests, noted for future consideration
Cost of Club Guests to be borne out of Club Funds, NOT factored into the ticket price, proposed and agreed.

Hon Sec.
Bill Kelloe felt it was time for him to retire. Accepted with pleasure the position of Asst Hon Sec. Roland Hughes appointed Hon. Sec.

N.B. At this time it seems that three Committee Members came from Cornhill Ward and three from Lime Street Ward.

I find that many members of the Ward club are Free-Masons i would be most obliged if the Secretary could assist me in achieving this., thus allowing me to feel a little more on the same level as the other Members”

Reply, “I regret that I cannot hel”.