As with most of the earlier years we have very little information and no pictures.
Any information or pictures, menus, programmes would be greatly appreciated

Some extra information has been provided by Past Master “Dickie” Bird, who became a Member in 1960, becoming Master in 1976. Providing much of the date from his diaries in 2020. Thank you.

Followed by a House Dinner with 30 Members and 42 Guests

Past Masters’ Jewels
It was proposed and seconded that Past Masters be given the right to wear a Past Master’s Jewel, subject to ratification at the next AGM. No mention as of now re where they will come from/be provided by?

Followed by a House Dinner 18 members and 25 Guests

80 paid attendees – Made a loss of 81.19.7 BUT substantial increase in Membership balanced this out

Given the substantial increase in Membership in the past year it was suggested that a larger venue be found for the Club’s Annual Dinner in 1962
Noted that the supply of rule Books was almost exhausted, investigations re a further stock, to be made

Conformation that Past Masters could wear Past Masters’ Jewels – purchased at at their own expense
Three Members proposed that the club consider organising events that would appeal to Ladies. The Meeting rules that “Ladies nights” should NOT be included in the Club’s Social Programme
The Hon Auditor proposed that thought should be given to arranging visits (e.g. Mansion House) and/or a Sherry/Wine Tasting evening. It was agreed that this proposal be considered at the next Committee Meeting.

7th May  Meeting – The Bunch of Grapes

The first time that this was used as a venue for a Meeting. It was going to be used quite frequently over the next decades.
7 Members in attendance.

Suggested that as a change from a House Dinner that a Novelty Meal be tried. Proposed Steak and Kidney Pudding Dinner at Pimms – Bishopsgate.
Yes this was a Pimms owned Bar. Used to Serve Pimms No1, 2, 3 and 4.   Was called Finches at some  point in the 1960’s i think.

1st October – Annual Dinner (Banquet) – Vintners’ Hall
Lord Mayor and Lady Mayoress in attendance, with the Sheriffs and their Ladies.

The annual Banquet was discussed and large deficit noted. (Mainly increased charges by the Caterer that could not be checked). “Whilst a substantial amount the Club would still be solvent IF all subscriptions paid”

The Hon Auditor again raised the Question of organising functions such as a Wine Tasting
The Master promised to investigate and perhaps Organise for Jan/Feb 1963.

A House Dinner followed.
21 Members in attendance with 23 Guests

Membership  – Approx 60
Financial status
Club Assets 130/18/5d
It was proposed and fully supported that the Ward Club make an Annual Donation of 5/5/0d (5 Guineas) to St Peter Upon Cornhill.

It was agreed that a Wine Tasting should be arranged within 6 weeks, Evening Max 25 attendees.

Special Committee Meeting -11th July – Great Eastern Hotel
To agree that the Lord Mayor be approached for us to hold our Annual Dinner at Mansion House.
I think this must have already happened in reality as the Meeting then discussed Costs and Menu.

N.B.
July 1963 – a letter was sent out the Master advising that the Club had been given permission to have a “Ladies Banquet”  in the Mansion House ,later in the year.

Three Social events were proposed for the year
Visits to – black museum, Truman’s Brewery and a Refuse Disposal Plant.

Committee Meeting
It was proposed and agreed that given the strong finances of the Club that the club should purchase Past Master’s Jewels. They would be provided by Alexander Clerk – Jewellers 13/10/0d each (Alexander Clarke’s Main shop was at the foot of Fountain House, 120 Fenchurch Street, was taken over and became Mappin and Webb.

House Dinner with 24 Members and 26 Guests followed on from the Meeting
Guests?!

A rare opportunity to visit this special museum, not normally open to the public and used for training of Detectives….. – The groups met in St Stephen’s Tavern Westminster before the visit. Very close by.

Currently the oldest known reference to a Civic Lunch

In the presence of the Lord Mayor Alderman Sir James Harman G.B.E
The whole event and presentation was in the style of a typical Livery Dinner
Grace by the Ward Chaplain, The Revd Meridith Davies MBE, TD, JP

Creme of Grouse – Madeira – Old Custom house Cercial
River Trout Belle Meuniere – Oestricher Doosberg Scheure 1961
Vol au Vent of Sweeetbreads
Sorbet with Iced Vodka
Sung Grace at the end
“For these and all Thy mercies given……..”
N.B.
I am not sure we would get away with Iced Vodka at a Civic Lunch in the 2020s ?

11 Members in attendance with 28 Guests

Mr Bird proposed that the Club should have a tie. He was asked to come back to the Committee with some possible designs.

House Dinner – 48 Members and 53 Guests
N.B. Something obviously happened within the Club around this time with numbers of attendees very much on the increase.
This was possibly due to our strong involvement with Lloyd’s?

19th Annual General Meeting and House Dinner – Feb 18th 1965 – Lloyd’s Library and The Captain’s Room
After a few attempts over the years, the Club at long last held an event in Lloyd’s – would continue for some years.

First sight of an Agenda for an AGM 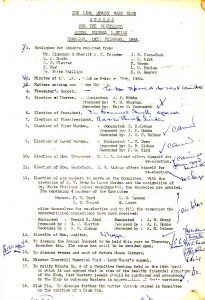 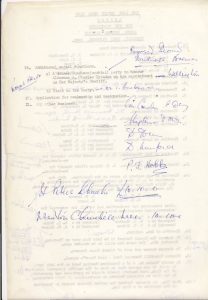 Meeting agreed by 25 votes to 2 that the Club should have a tie, as proposed by Mr F.Bird. A sub-committee to be formed to follow up on this proposal.

18 Members in attendance with 25 Guests

11 Members in attendance
Noted the Resignation of Sir Bracewell Smith, as Alderman

A design for the First Ward Club Tie was put to the Committee – with the design  being explained by Mr Bird.

In his letter to the makers, John Paterson and Co, Islington, he stated “the plan is to have two motifs on the same tie – one being a dragons wing on a bar (based on one specific design of the City of London Crest, complete with the Cross of St George and Sword. The other to be a wooden sailing ship in full sail – similar to the one at the top of the Lloyd’s Crest (without gun smoke). Each to be divided by a “chalk line” to represent Lime from the Lime Kilns of Lime Street.
The Ties were made of Terylene (meant to last for ever, and probably will)
It was agreed that 115/0/0 be spend on the purchase of said ties. (150 ties) 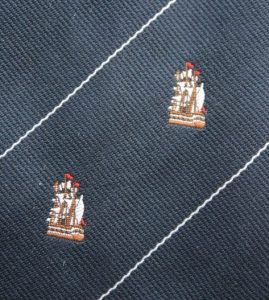 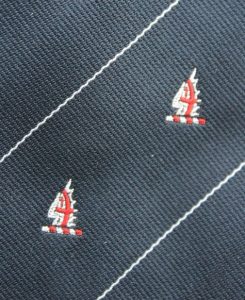 Reported that the Club had raised 1,400/0/0d in support of the Lord Mayor’s Winston Churchill Appeal
– quite a substantial sum – the equivalent of 4 Year’s salary for a Junior (very) Clerk working in the City.

The Chairman spoke of the Role of the the late President in being a founding father of the Club and tht the Master, IPM and Hon Secretary had attended the Memorial Service on behalf of the Club.

Noted that the members had donated 1,400/0/0d to the City of London Winston Churchill Memorial Appeal

Specifically noted that 10/10/00 be donated too St Peter upon Cornhill and that the new vicar be invited to Club events. It was pointed out that he was the Club Chaplain This phrase not seen before in the Minutes.

19th May Committee Meeting and Dinner  – the Orpheus Club, St Mary at Hill

7 New Members were proposed and accepted but 2 Committee Members proposed that in the future applicants should have a City Address or at least be useful within the City Civic and be within the Ward. The Committee Agreed. Think this went against the Rules of the Club and probably overtime, ignored.

As a follow up to the suggestion re Members having City Addresses….. at the last Committee Meeting, Major Duckworth pointed to Rule 3 (e) which allowed “any other person, who in the opinion of the committee is suitable for Membership” to be proposed.
Many subscriptions were outstanding.

Made a surplus of 12/17/11d. The first time since the foundation of the Ward Club that this had occurred. 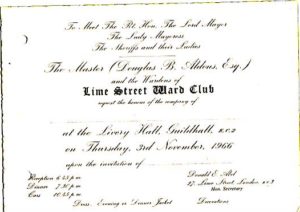 See the discussions and outcome at the forthcoming AGM (1967)