Probably one of the more “exciting” AGM’s

Civic Lunch
The Lord Mayor had made it clear that given his increasing busy schedule it would not be possible for him to attend an evening function in late 1967.
He was asked if he would attend Cocktails only and replied that he would expect to attend a whole event. Thus Lunch was proposed and agreed for 3rd November.
After “discussion” it was proposed and seconded that Ladies be allowed to be present. An amendment was proposed and seconded that NO Ladies should be allowed to attend. The Amendment was put to the AGM 13 in favour – 13 against. The Master had the casting vote. He voted in favour of the Ladies being allowed to attend the Lunch.

Banquet and Ball
On the assumption that Ladies would not be allowed to the Lunch the Committee had already held quite a long discussion about a “Ladies night”
This was put to the AGM and agreed for September 29th with NO Dancing.
An amendment was  Proposed and Seconded and  put to the Meeting that there should be Dancing. Carried 13 votes to 4

Cocktails and Dinner in the Captain’s Room

There is now an Entertainments Committee whose role is to organise the Annual Banquet and Ball, plus the Civic Lunch.
Discussion re the Venue for the Banquet and Ball. Painter Stainer’s Hall had been booked but it had been ascertained that the Guildhall were willing to offer Ward Clubs the possibility of using Guildhall with no room hire charge. It was suggested that plans be changed. After a vote it was agreed to stay with Painter Stainers’ Hall for this year at least.

A review of the proof of the invitation to the Dinner Dance took place.
Agreed to include the Wine Descriptions, agreed NOT to show the name of the Toastmaster on the Menu.

United Wards Club Soiree
Langbourn Ward Club proposed that all Wards should combine to entertain  the Lord Mayor at Guildhall as the Lord Mayor only wants to meet Members, not their Guests. The Hon. Sec would attend a Meeting of all the Ward Club Hon. Secs later in the year, and report back.

This would have been a really fascinating if slightly gruesome visit. – following, thanks to Wilkipedia.

A collection of criminal memorabilia kept at New Scotland Yard, headquarters of the Metropolitan Police Service in London, England. The museum came into existence sometime in 1874, and has been know as the Black Museum unofficially. It was housed at Scotland Yard, with the exhibits used for training of detectives. It has never been open to the public.

“As this is the first event of the Season, the Master hopes that you will make every endeavour to support him in making this a memorable evening worthy  of our Ladies”

It happened, supported by the traders in Leadenhall Market. no doubt the Master and other Members of the Ward Club attended

Noted the need for a change in Date and Venue for the Civic Luncheon owing to a important diplomatic event that the LM had to attend.

Report back re Langbourn Proposal for a joint Ward Club Event involving the Lord Mayor and Ward Club Members.
Agreed that Lime Street Ward Club would still invite the LM to our Luncheon next year.

Membership Standards
A re run of a question from a few years back.
A member was proposed by Major Duckworth, who did not, it seems have a City Address  – he was accepted.
The Master pointed out that in his opinion the Rules should be tightened up. Agreed to defer to the AGM. 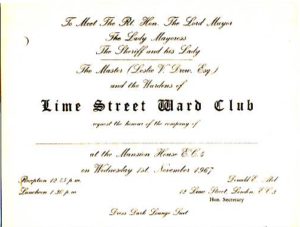 This event was to have been at Carpenters’ Hall on the 3rd November. However in Mid October the Ward Club were informed that this date made it impossible for for the Lord Mayor and Lady Mayoress to attend – they were requested to attend a Lunch that the President of Turkey was giving in honour of the Queen and Prince Phillip. Instead, “Would the Ward Club come to Mansion House on the 1st?” – No doubt about the answer.

Agreed that Dress Code would be Morning Dress for Master, Wardens and Hon Sec, Lounge Suits for all others.
Speeches to be kept short!
Soup, Main Course, Desert and Coffee