Ward Beadle for the role of a Livery Beadle click here

The Ward Beadle is an elected officer of the Ward acting on instruction of the Alderman. In the reign of King John, the Beadle was the sole judge and witness of a citizen’s compliance with summonses to “Chief Folk-Moots” (meetings) of which they were three a year.
Citizens who failed to attend were subject to the fine of £2 at a time when a workmen often earned only a penny a week.

Today Wards still have an Annual “Moot or Mote” , where the Alderman and the Common Councilmen make short presentations to and receive questions from the Ward electorate. A Ward “Mote” is also called when an election has been called.   In Livery these Meetings are often referred to as ‘Common Hall’. The two major ones for the whole of the City being one for the election of the Lord Mayor, one for election of the Sheriffs. –

The original role of the Beadle was as an Electoral Officer, with the Ward Clerk as Recorder and the Alderman as Returning Officer. Duties today are largely ceremonial and remain the preserve of the Beadle.

Edward Kipping was Ward Beadle between 1960 until his retirement in 2012. He died in 2013. His son Stephen took over the role of Beadle.
Sir John Stuttard remembers well the occasion that they both walked “up the aisle” in Guildhall like a couple of “old crocks”, leaning on each other. Sir John had just had a hip operation and Edward K had just had a knee operation!! This was only there second outing together. 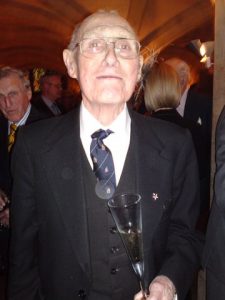 Below is the eulogy given at his funeral at St George’s Church, Littleport on the 4th February 2013 by Alderman Sir John Stuttard.

“Although he was 22 years older than me, as you will learn in a moment, Edward Kipping and I had a very special relationship. It is therefore a great honour for me to be able to say a few words today, on the occasion of his funeral, about a very special person, who was widely admired, was fun to be with, and was much loved.

A true Cockney, Edward spent his early life in Bethnal Green where his grandfather was a coal merchant, with a horse and cart. As a young child, Edward used to run between the horse’s legs, which prompted his Mother to say “if you can walk under a horse, Edward, you’ll never be frightened”. Edward was indeed a man of courage, as this was later to show itself.

After wartime service in the Royal Navy, he worked as a bus driver and then he went up market – he became a chauffeur.

I first met Edward 12 years ago, when I was elected Alderman for the Ward of Lime Street in the City of London. He had been the ceremonial Ward Beadle for Lime Street since the 1960s and he bemoaned the fact that none of his Aldermen, whom he had escorted, had ever gone on to be the Lord Mayor.

After my election, he asked me if I would reappoint him as Ward Beadle. He was always quite upfront like that. But, frankly, for me to be guided by someone so experienced was a ‘no brainer’. Then he told me that I had to do whatever was needed for me to become Lord Mayor, so that his ambition could be fulfilled. His ambition mind you, not my ambition!

Our second meeting was a month later when, on the occasion of the Election of the Sheriffs on St John’s Day, he and I escorted each other in the Great Hall at Guildhall to preside over the Election Ceremony.

I was just recovering from a hip operation and Edward had just had his knee done. So we were like a couple of old crocks supporting each other, as we hobbled up the aisle together. I don’t think that the ceremonial gravitas of this important civic occasion was enhanced by either of our performances.

Edward had long involvement with, and experience of, the Civic side of the City of London. This came about through his work, as a chauffeur, for Cyril Sweett, founder of the UK’s oldest quantity surveying firms. Cyril was elected as one of the two City Sheriffs in 1965 and he gave Edward an interesting commission.

In those days, you had to be wealthy to take on this Shrieval role and, as soon as he was elected, Sheriff Sweet sent Edward off to Berkeley Square to buy him a new Rolls-Royce car. The Sheriff gave him a large cheque made out to HR Owen for the latest model. A few hours later, Edward returned empty-handed, so to speak, with the explanation that the price was more than the new Sheriff had bargained for. This minor matter was, however, soon resolved and Edward became the proud chauffeur of a brand new Phantom V. This was a far cry from his Granddad’s horse and cart and a far cry from his own previous career as an omnibus driver.

The following year, in 1966, Edward was granted Freedom of the City of London and his Civic Service continued, as he became, in time, Beadle for Lime Street, the Beadle of Pewterer’s Hall and then an Usher at the Old Bailey.

As Beadle for Lime Street, he served many Aldermen but he and I finally made it in 2006 when I became Lord Mayor and he walked beside the Lord Mayor’s coach. Aged 83, he stayed the three mile course carrying the Lime Street mace, which dates from the 17th century and is one of the oldest in the City.

We were all thrilled when, on retirement as Beadle in 2008, Edward proposed that one of his sons, Stephen, should be appointed as his successor in Lime Street. We are delighted that a tradition should be so continued, with the Kipping family now woven into the fabric of Lime Street.

One of the proudest moments of my Mayoralty was awarding Edward the Arctic Star for his services in the Royal Navy during the Second World War. Edward served in the Arctic escorting convoys to Russia, a journey which Prime Minister Winston Churchill called “the most dangerous run of the War”. It was a living hell, where the life expectancy for those torpedoed in the frozen waters was about three minutes. Yet, those convoys managed to deliver a staggering total of over 12,000 tanks, 22,000 aircraft and 375,000 trucks, as well as four million tons of ammunition.

These valiant efforts helped ensure that the Soviets were properly supplied to help defeat the Axis Powers, not least at the Battle of Stalingrad which anniversary we have recently commemorated. In those wartime years, Edward did indeed demonstrate the courage which his Mother had observed in that little boy scurrying between those horse’s legs.

Edward, you served the City of London well. You served the Old Bailey, the Shrievalty and the Mayoralty extremely well. But, as a young man, you risked everything and you served your country well.

We, gathered here today, salute you for what you have done. We thank God for your life and for your contribution. May you now rest in peace”. 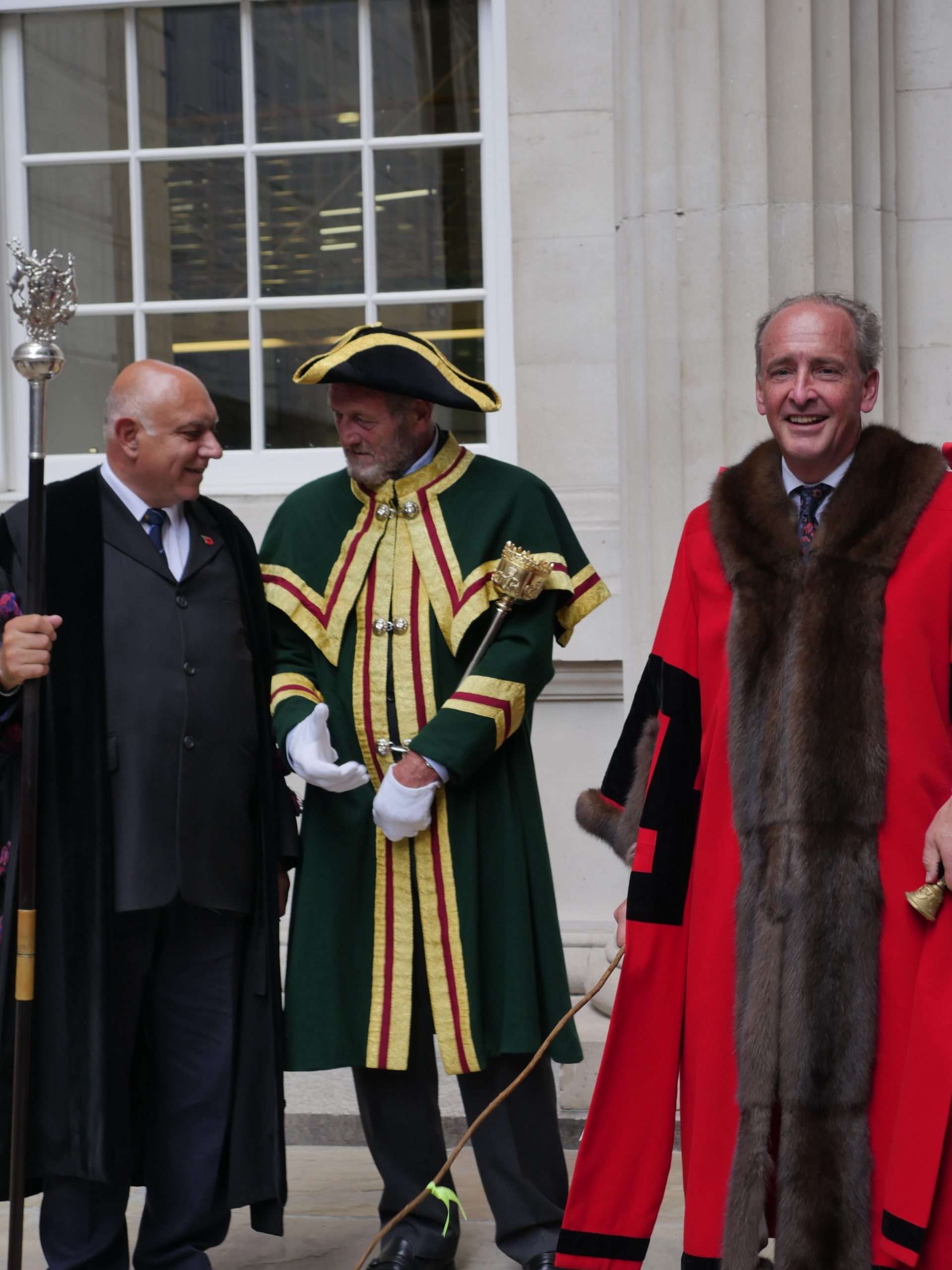 Our Beadle Stephen Kipping with Alderman Sir Charles Bowman and Clerk to the Leathersellers. (Beating the Bounds)